"I listen to a work I’ve already read and loved. Listening to it is just a yummy thing. I’m so into it." 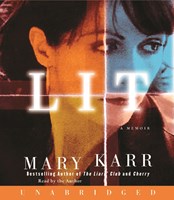 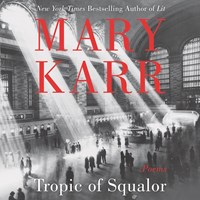 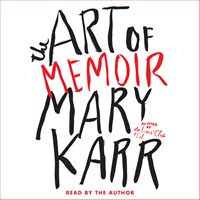 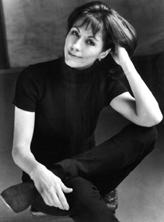 With her Texas twang, easy manner, and earthy language, Mary Karr sounds like someone you might meet on the next barstool, rather than the literary circuit. But don’t let that fool you. Karr is a poet, as well as an award-winning author (PEN/Margaret Albrand Award). Her acute sense for language—for the exact right but still surprising word—is evident throughout both her memoirs about growing up in the ’50s and ’60s—THE LIAR’S CLUB, about surviving her dysfunctional family, and her latest work, CHERRY, about her turbulent adolescence.

“Language changed my life. If you asked me at age 5 what I wanted to be, I’d say a poet. I’ve written poetry for 20 years. I’ve got a relentless appetite for a butt-whipping: If you’re a poet in America, there’s not a lot of surface reward.”

The memoirs, on the other hand, were “highly money-motivated.” Karr had been teaching memoir writing since 1986, “before anybody thought it was a big deal.” Working in the memoir form had something to do with finding out how to become a writer. “I wanted to know how you live in the world. I grew up eating on melamine dinnerware,” she says of her blue-collar background. “I wanted to know how to be a writer. Like where do you go and how do you behave?”

(So where do you go and how do you behave? “You just get out there, and you scuffle around. You just keep showing up.”)

About the current hunger for memoirs, Karr comments, “There’s something about the form that expresses what fiction writers don’t express. It provides intimacy with a character who is emotionally engaged. I think we’re lonely as a culture; we’re all in our so-called cocoons. There’s a sense of emotional engagement you get from a memoir that you don’t get from John Barth. Also,” she adds, “forms rise and fall. Whatever form is most reflective of the problems of an age will have a minor ascendancy during that period.

“One of the things I realized in writing Cherry was how shaped I was by my friends. I’m still friends with everyone in this book who’s still alive.” How does she remember the details of all those years ago so sharply? “I just start thinking about what my obsessions were at that time. Obviously, I don’t remember these things; I only believe I remember them. But I have yet to have anybody storm up a lawsuit at me.”

While Karr listens to audiobooks “all the time—I’ve never listened to my own, ever. But I’m a big fan of other people’s. Brad Pitt’s version of All the Pretty Horses is one of the great audiobooks. I’ve probably listened to it six times driving to Boston or to Connecticut. And I just sob all the way down the freeway. And I have a lot of recordings of poetry: Pound, Eliot, Plath, Sexton, Bishop.

“Usually what I’ll do is listen to a work I’ve already read and loved. Listening to it is just a yummy thing. There’s something about having it out in the air. When my son was 3 years old, he was watching Mr. Rogers on TV, and he said, ‘He’s talking only to me.’ And that’s how I feel about listening to audiobooks. I’m so into it.
It’s great. It’s like taking Communion.”—Elizabeth K. Dodge