“There’s something about saying it aloud, reading my words aloud, actually using my voice, that’s different from seeing my words on paper.” 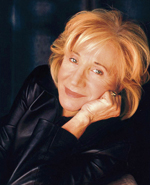 In a word, that’s Olympia Dukakis’s reaction to the challenge of narrating the audiobook version of her memoir, ASK ME AGAIN TOMORROW.

The title is curiously ambiguous, imprecise, nondefinitive, transient—hanging in mid-passage, so to speak—because that’s the way the Academy Award-winning actress sees her life.

It—and she—is “in progress,” she says. “I am startled anew—maybe not every day, but frequently enough.”

Dukakis, Best Supporting Actress in the 1988 Oscar derby for her touching portrayal of a spurned wife in MOONSTRUCK, boasts an impressive array of critically acclaimed work in theater and movies and on television (PBS’s “Tales of the City” and its cable sequels).

Rather than writing a book dripping with celebrity names and delicious on-set revelations, though, she has turned out a candid account of her first-generation Greek-American childhood, adolescence, and adulthood, rooted in issues of self-esteem, personal anxieties, and ethnic and gender bias. It reveals a woman who not only has largely overcome these challenges, but has triumphed in the wider world—as a champion teenaged competitive fencer, as a physical therapist in the depths of the polio epidemic of the 1950s, as creator and director of a theater company in her New Jersey community in the 1970s and 1980s, as the Oscar victor the same year her cousin Michael was the Democratic nominee for president, and as a sought-after speaker on women’s concerns in recent years.

Normally, Dukakis says, she’s quite comfortable with the process of narrating audiobooks—next up is her rendering of Thomas Cahill’s fall title, SAILING THE WINE-DARK SEA: WHY THE GREEKS MATTER—but not in this case. “There’s something about saying it aloud, reading my words aloud, actually using my voice, that’s different from seeing my words on paper.”

As difficult as it was “sitting in a room and having to dive into the book from the beginning,” the toughest part was reliving those relatively brief sections with her father’s “journeys away,” as she puts it, the extramarital wanderings while she was growing up that she only learned of years later. “It just came over me, what must have been going on in his life,” she notes of reliving those episodes by reading them. And then there were her dissections of the craft of acting. “As I read it, I thought, ‘Ah, I should rewrite this’—or ‘There must be a better way to say that.’”

Naturally, the abridged version of her book is only a segment of her story. She reviewed the trims and in the end “kinda went with” the editor’s script. “I thought, ‘If I get started here, this’ll be like diving into fudge.’ So I just let it go. I think the essentials are really there. Of course, the way in which I read it has to create a different sense [for the listener] because it’s much more personal. It’s coming through me.”

With two movies slated for release later this year and some New York stage commitments on tap during the coming season, Dukakis, at 72, entertains few thoughts of retiring.

What keeps her going?