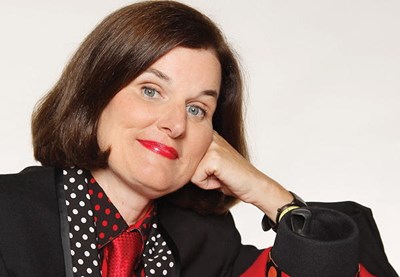 "It’s a rare gift when a comedian who makes you laugh also makes you think." 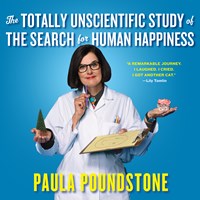 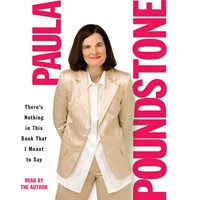 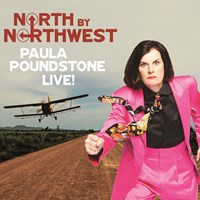 It’s a rare gift when a comedian who makes you laugh also makes you think. Paula Poundstone is a stand-up comedian known for her pithy humor. She’s also an author, an actress, a mom, and a sometimes audiobook narrator. (She narrated her 2007 memoir, THERE’S NOTHING IN THIS BOOK THAT I MEANT TO SAY.) In addition to being a frequent panelist on NPR’s weekly news quiz show, “Wait, Wait . . . Don’t Tell Me,” she recently served as emcee for the 2016 Audie Awards. “I had a great time. It was really fun. I knew almost zero about the organization itself, so I could ask the audience a lot of questions.” She tells us, “I love talking to the audience. You don’t know what they’re going to say.”

She may not have known much about the Audio Publishers Association, but Poundstone and her kids know plenty about audiobooks. “When my kids were growing up, we had so much time in the car driving to this appointment and that, and while I love to read aloud to them--while I was driving?--I felt that wasn’t good.” She guesses they listened to every children’s audiobook in the Santa Monica Library. Her kids were lucky enough to be growing up during the Harry Potter years, and Poundstone made the decision to read the books aloud to her kids before she let them listen to the audiobooks. “I knew that after they heard Jim Dale, I would truly be chopped liver. He is the gold standard.”

While listening to PBS one day, Poundstone heard a discussion of THE WHITES by Richard Price. It sounded interesting, and when she saw the audiobook in a bookstore, she decided to listen to it. She finally got around to listening one night while she was doing the dishes. “I put it on, and I swear, I was trying to find more dishes to do. I started looking through the cabinets, just so I didn’t have to stop hearing the story. I love audiobooks!”

These days she listens to a lot of nonfiction. She listened to THE GOD DELUSION, written and read by Richard Dawkins. “I listen to THE GOD DELUSION the way somebody else would listen to a rock-and-roll CD.” Other favorite listens include BRAIN RULES by John Medina. “It’s about the brain.” She laughs. “At home, in the kitchen, I listen to MAY IT PLEASE THE COURT. It’s a spoken-word thing--23 live recordings of landmark cases as argued before the Supreme Court. I’ve been listening to that for years. I listen to it over and over and over again because it is brilliant!”

When an idea strikes her as funny, Poundstone jots it down, in less detail now than she did when she first started out. She guesses that a third of her performances are improvised. “Sometimes the audience will call out something that I do have material on. I kind of rummage around in my brain to find it. I’m eating a lot of blueberries these days.”

What makes her laugh? “My own personal failures amuse me. Maybe that’s not the right dynamic. Maybe if I weren’t so amused by them, I would do a better job.”

In June, HighBridge released Poundstone’s two-CD album called NORTH BY NORTHWEST. “One CD was recorded in Portland, Oregon, and one in Bayfield, Wisconsin.” And there’s a new memoir coming out. She’ll record this one, too. It’s called THE TOTALLY UNSCIENTIFIC STUDY OF THE SEARCH FOR HUMAN HAPPINESS. “Because the title is so long, when it ships in the boxes, it says THE TOTALLY UN.”--S.J. Henschel