"I take my hat off to people who [narrate], particularly my books, which involve both the French language and French characters." 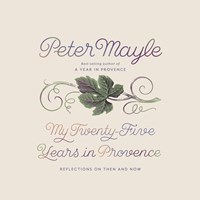 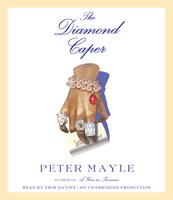 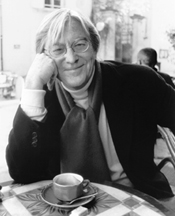 Peter Mayle, bestselling author of A YEAR IN PROVENCE, TOUJOURS PROVENCE, and ENCORE PROVENCE, offers some advice, when asked, to dreamy readers who want to follow in his footsteps by moving to France. “For people who want to live in the country,” he says, “I suggest going over in November and renting something for the winter. If you like it then, you'll love it the rest of the year. So many people go in the summer, when they have a couple of weeks of perfect weather. It's a different place in the winter—I happen to like it very much, but it's not the same at all. So I would say—go there at the least busy, most chilly time of year and see how you like it.”

Although Mayle summarizes his background in his first memoir, many readers may not remember that he had two earlier lives before moving to France. First, he spent more than a decade writing advertising in London and New York; then he spent a decade as a freelance writer and children's author. At that point, Mayle and his wife moved to France, where the author expected to write his first novel. “But I got distracted by what I was doing [settling in and getting the house renovated]. After a while my agent told me that I'd better write something or we'd both be in trouble, so I started writing the first memoir.” Eventually, Mayle did write several novels. Now he simply follows his intuition and in typical English understatement adds, “So far, thank God, it seems to have worked.”

The new memoir, FRENCH LESSONS, is a gastronomic adventure in which Mayle explores quirky food festivals in out-of-the-way villages throughout France. Mayle hadn't had the opportunity to listen to Simon Jones's reading of the book before he left France to begin a U.S. book tour, but, having recorded two of his books himself for the BBC, he knows how difficult it is. “I remember very clearly ten hours in the studio for each one. I take my hat off to people who can do it regularly and professionally, particularly my books, which involve both the French language and French characters. It's not enough to do a slightly different voice in English; you have to do something that makes the listener understand that a whole different culture is being depicted.”

Mayle is very familiar with John Thaw's portrayal of him in the British television production of A YEAR IN PROVENCE, which was also broadcast in the U.S. “It's a weird experience to see someone playing you on TV. I think he's a very good actor, but the only thing I would say is that in the episodes I watched—and I haven't seen all of them because I get embarrassed by them—is that I thought he looked a bit more cross than I ever was in real life.”—Elizabeth K. Dodge