"[Audiobooks] offer what I’ve always felt is the strength of public radio and grew to cherish as I worked in it--the ability to tell a story that is all in the voice and language.” 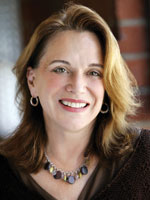 National Public Radio’s (NPR) Renee Montagne says a new collection of stories, interviews, and commentaries celebrating the fortieth anniversary of NPR depicts every kind of story listened to by over 26 million people each week. Each decade of NPR: THE FIRST FORTY YEARS is hosted by the very familiar voice of an NPR professional: Special Correspondent Susan Stamberg; Noah Adams and Guy Raz, both hosts of “All Things Considered;” and Montagne herself, co-host of “Morning Edition.”

“The project was intended to be an impressionistic look back,” Montagne says, “moments in time from the last four decades of NPR.” She hosts stories from the 1990s. “The stories were selected for what NPR does rather magnificently, which is, in the most vivid way, to tell stories with sound and with tone of voice. All the stories in the audiobook offer something that the printed edition can’t. They offer what I’ve always felt is the strength of public radio and grew to cherish as I worked in it--the ability to tell a story that is all in the voice and language.”

Montagne says one example of the difference between something that works better in the audiobook version than on the printed page is the discovery of humorist David Sedaris. “I’ll say this, ‘Santaland Diaries’ on the page is quite funny. But ‘Santaland Diaries’ as performed by David Sedaris is a work of art.” She remembers filling in for “Morning Edition” anchor Bob Edwards when she heard gales of laughter coming from an editing booth. “This was Christmas Eve, somewhere around 2:30 in the morning. I opened the door, and what I heard was a demented version of Billie Holiday singing a Christmas carol. They rolled the tape again for me, and I stopped dead in my tracks as I listened to David Sedaris ‘doing’ Holiday--just the way we now know he tells all his stories.”

Other stories in this collection include a talk with comedian Dame Edna; an interview with comedian Chris Rock; cuts from the inimitable Click and Clack, the Tappet Brothers [Tom and Ray Magliozzi of “Car Talk”]; and Ira Glass’s coverage of a high school prom. But not every story is for laughs. NPR’s coverage of the terrorist attacks of 9/11 is one example of the hard news stories, as is a soul-chilling report from Africa.

Montagne is from a military family and spent a good deal of her reporting life overseas. She won the prestigious Alfred I. DuPont- Columbia University Award for coverage of South Africa’s historic election that brought Nelson Mandela to power. Around the time of that election, word was leaking out that something horrible was happening in Rwanda. NPR reporter Michael Skoler began filing stories on what would eventually be called the Rwandan genocide, which cost over 800,000 lives. Montagne remembers listening to one of Skoler’s reports. “He walked into a church in which were piled hundreds of bodies. The story he told was dramatized by his breathing because he could hardly take a breath; the stench of death was so bad. This was put on the air. It couldn’t have been a pleasant thing to hear, but if you could ever say of radio that you were there and not wanting to be, that you were pulled in, in a way that you could not set down as with a newspaper, this was it. You couldn’t get away. It was Sensurround.”--Randy O’Brien