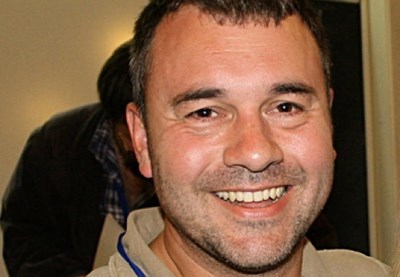 "Morgan has heard from truck drivers, salespeople, cooks, and accountants, all testifying that listening to a good book helps them through their daily rounds."

Intense, curious, and intelligent. A conversation with English science fiction author Richard K. Morgan can happily land on the finer points of any number of subjects, from human genetics to global politics to Mississippi Delta blues.

His award-winning novels are equally as adventuresome, layered, and challenging. “I like the intricate, messy stuff,” Morgan laughs. “That’s when I’m on my home ground.”

Morgan’s early works, such as WOKEN FURIES, were heavily influenced by the cyberpunk sensibilities of William Gibson, the dystopian landscapes of Philip K. Dick, and Ridley Scott’s film “Blade Runner.” He is definitely a fan of the darker, more tattered side of the universe.

“I didn’t want to talk about the times when a technology was getting started. What I was interested in is the part when it’s old--when the technology is already out there and humans have to deal with the consequences,” he explains. “People will find ways to deal with technology that might seem crazy or horrible to us but will seem normal to them.”

With that healthy attitude and a need to create marvelously detailed, fully realized future worlds, Morgan believes that writers of modern science fiction are obligated to go the extra mile and explore how one brave idea will affect another. His latest novel, THIRTEEN, is a perfect example. In it, he postulates a near-future world in which corporations have experimented to create genetically enhanced combat soldiers. That’s an interesting idea in itself, but Morgan goes on to suggest that the experiments most likely would have taken place in the Developing World and the test subjects would have been from the most disadvantaged ranks of society. Suddenly a novel about biology becomes a story that includes heady themes of race, poverty, gender roles, and reparation.

Morgan pays close attention to dialogue in his work, and for THIRTEEN he drew heavily from his 14 years of traveling and teaching English abroad to create the voices of a number of the supporting characters. “Accents constantly play back in my head,” he says. “Sevgi Ertekin’s father is based on the middle-aged Turkish guys I heard when I was in Istanbul, and I also had a very strong sense of what the Guatemalan sounds like.”

Like many authors, Morgan reads at conventions and bookstores, but he’s happy to leave the performing of his audiobooks to the professionals. With accents spanning four continents and two planets (Earth and Mars), he’s glad to have veteran narrator Simon Vance in his corner. “I take my hat off to these guys. It’s a very, very tricky thing to do, to get it all down just right.”

Morgan has discovered that audiobooks hold an important place in his readers’ lives. He’s heard from truck drivers, salespeople, cooks, and accountants, all testifying that listening to a good book helps them through their daily rounds.

“I’m lucky,” he concludes. His first book, ALTERED CARBON, came out to rave reviews and was immediately optioned for film rights to the tune of $1,000,000.

Luck maybe. But a cutting-edge imagination, painstaking research, and engaging characters are what have made Morgan the newest heir to a long and noble science fiction tradition.--Brian Price