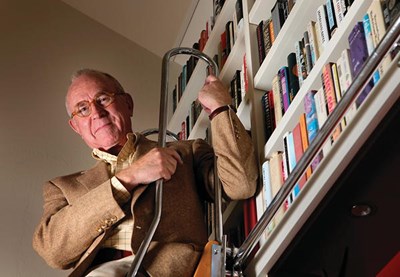 "Rhodes is that rare popular writer who can make understandable the densest and most technical of subjects--atomic physics, mad cow disease, Cold War politics." 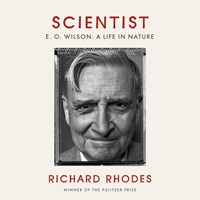 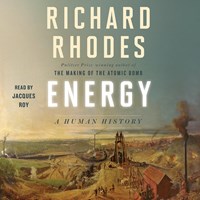 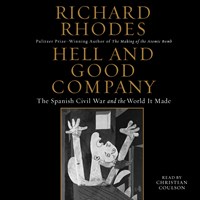 HEDY’S FOLLY is a bit offbeat and something of a sleeper for Richard Rhodes, one of America’s preeminent nonfiction writers, but one who until now--the pun is shameless but irresistible--has been “under the radar” for most audiobook listeners.

Rhodes, best known for his Pulitzer Prize-winning MAKING OF THE ATOMIC BOMB, is that rare popular writer who can make plain and understandable the densest and most technical of subjects--atomic physics, mad cow disease, Cold War politics. Only a few of his titles have been available on audio, and then only in limited format: abridged or, until recently, only on cassette.

Rhodes is the narrator for the abridgments of DEADLY FEASTS and DARK SUN, histories of the mad cow disease epidemic and the making of the hydrogen bomb, respectively. His is a natural Kansas-bred voice, engaging and unaffected. “An interesting experience and quite a challenge,” he says of those recordings. “I’m not trained as a speaker, though I’ve had a lot of experience over the years.”

Rhodes’s most recent titles, THE TWILIGHT OF THE BOMBS and ARSENALS OF FOLLY, have been produced unabridged by Books on Tape, and read by Robertson Dean. Rhodes is especially pleased with the choice of Bernadette Dunne for HEDY’S FOLLY. “I had a chance to listen to samples of several different voices and was delighted with hers. She brings just the right combination of intimacy and a kind of trained voice for Hedy--whose story is, on one hand, that of a superb professional actress and, on the other hand, very personal.”

The persona Rhodes conveys in his own readings is close kin with the narrative persona he creates on the page, and with his approach to his subjects in general.

“I was drawn to science as a boy by the fact that the atomic bombs seemed to end the Second World War. That war was my entire childhood. One of my earliest memories was going from house to house shouting, ‘They just bombed Pearl Harbor!’ I didn’t even know what it meant. But it certainly got people’s attention.”

Rhodes’s popularity--and the respect he’s garnered in many of the nation’s elite policymaking institutions, particularly in matters of nuclear power--rests in large part on his ability to make specialized knowledge available to the general public. “I don’t have any particular training as a technologist,” Rhodes says, speaking from his seaside home in Half Moon Bay, California, where it’s a foggy morning, and where his ten-foot commute to his office doesn’t allow much time for audio listening. “Paradoxically, I think that helps, because I have to explain scientific subjects to myself first, and understand them first--and then try to explain them to others who, like me, are presumably mathematically illiterate.”

Rhodes confesses he’s sampled but doesn’t listen to full recordings of his own works. “Listeners and readers should know that writers are already working on their next book by the time the last book is published. They tend to be focused on the next subject rather than on the one people are reading.”

Next for him is a book on the artists and writers involved in the Spanish Civil War. “Books have been written about parts of the story, but no one has pulled it all together. And, of course, it’s a very colorful story. Hemingway. Martha Gellhorn. Picasso painting Guernica. I’m just beginning to get into it.”

He pauses, and you can almost feel the gears moving into place. “And because I’m also interested in technology, I’m also looking at the use of Spain by Germany as a proving ground for the Second World War--carpet bombing, for example. A terrible, bloody war--half a million people were killed.”--David A. Walton