"I think that my books do adapt quite well [to audio], simply because I work hard to bring them to reality. I imagine everything as if it were in film, and that has to be the nearest medium to audio production." 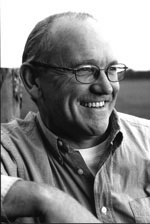 If novelist Robin Pilcher ever gets in a literary pinch, he doesn’t have far to go to get advice. His mother, longtime successful novelist Rosamunde Pilcher, lives about a mile away.

"She took one look at my first attempts at writing and said, ‘Robin, you write dialogue. So everything you have to say, say it in dialogue.’" He continues: "So I went back home and said to myself, ‘Right! I’m writing a novel, but I’ll just work it like a screenplay. Imagine that you have 105 minutes to tell the whole story.’ What transpired, I hope, was a novel that flows like a page-turner."

That effort was the novel AN OCEAN APART. He says he used the same criteria when he started writing STARTING OVER. And it’s clear as one listens to the novel in audio that he followed his own advice. The story is dialogue-driven, yet the descriptive passages offer a solid sense of place. He continues that style in A RISK WORTH TAKING. In fact, RISK shares several traits with STARTING OVER. They both take place in Scotland. And both focus on taking control of one’s life and breaking with the past.

Pilcher spent several years as a documentary filmmaker. That career, he says, has influenced his writing in a roundabout way. "My experience behind the camera and understanding of the complexities of film gave me the perfect launching pad. I’m delighted that the film rights of AN OCEAN APART have been sold. It’s like everything coming full circle, to its rightful ending."

Pilcher loves to listen to audiobooks. "If I’m driving long distances, which we do quite often in Scotland, I always have one on."

But he says producing audios does not influence his writing. "That would be too much for my small brain to cope with," he says with a gentle laugh. "However, I think that my books do adapt quite well, simply because I work hard to bring them to reality. I imagine everything as if it were in film, and that has to be the nearest medium to audio production."—Richard C. Gotshall