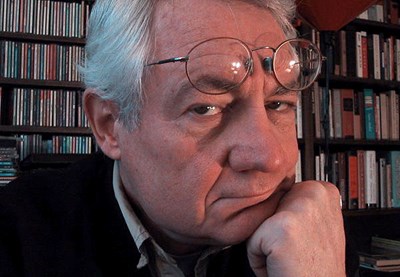 "Southern culture is very oral. Southerners like to talk and roll words around in our mouths. I think Southern talk tends not to be as analytical as Northern talk.”

“I’m a restless person, and I don’t tend to sit still for long.” That uneasy nature and keen eye for the absurdities of life have served humorist Roy Blount, Jr., well. He has composed a large body of work, including plays, screenplays, articles, columns, and now his twentieth book, Long Time Leaving. Though he’s spent a good deal of time in the North, Blount still carries much of his Georgia accent.

That accent comes in handy when Blount reads his work for audiobooks. LONG TIME LEAVING isn’t his first effort, but he says it was his most enjoyable so far. “This last recording session was my favorite one. In the past I’ve had terrible troubles with making little bushy noises with my shirt or something, but this time they were able to deal with my shirt. Every now and then I’d flip a page too soon, but other than that it was fine. This one took two days in the studio. I find it really tiring. I found that there are times when I’ve written a check with my keyboard that my mouth can’t cash.”

Blount drops quotes from real people in his essays, causing him to try to sound like someone he’s not. “Another problem I’ve run up on is suddenly having to do Ray Charles’s voice and Flip Wilson’s. I’ve got to render that somehow aurally. It’s a challenge.”

Another challenge presented in the new book was the number of times he had to sing. “I just can’t stop myself. I will say it sounds better in my head.” Even though he’s a member of the Rock Bottom Remainders (a cover band of writers, including Stephen King, Dave Barry, Amy Tan, Ridley Pearson, Scott Turow, and Mitch Albom), he’s not really allowed to sing. “I mainly introduce the band. I sometimes sing titles like ‘G-L-O-R-I-A . . . Gloria,’ and I come in on ‘Wild Thing.’ You know, that part ‘you MOVE me.’”

Another thing that “moves” Blount is down-home cookin’. He likes to eat and to talk about food, sometimes at the same time. “I think it’s true that we like talking about what we’re eating while we’re eating it. Southern culture is very oral. Southerners like to talk and roll words around in our mouths. I think Southern talk tends not to be as analytical as Northern talk.”

And while Blount is getting better at recording books, listening to them is something else. “My wife and I listened to Faulkner’s THE SOUND AND THE FURY on our way down South once. It was amazing how well it was done for one thing, but it was awfully understandable. I was surprised how you could keep track of what’s going on. It was quite a revelation to me that somebody could render the novel so clearly and understandably by voice.”

So what would it be like for him to sit next to someone on a bus or plane who he could tell was listening to his book? “That would be eerie to me. I’ve been on the radio long enough, and people say they recognize my voice. You can tell they’re disappointed. They’d prefer me to be disembodied.”--Randy O’Brien