“For all kinds of reasons, [the narrator] had to be me. I’m a performer, and I knew the reader had to be an Indian actor who knew the accent. I knew it was going to be a great public piece.” 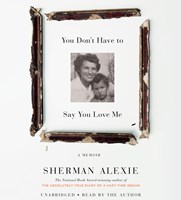 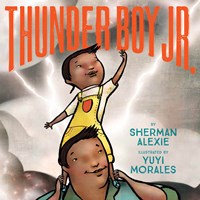 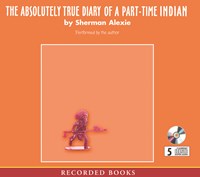 Sherman Alexie is used to reading his work aloud, but he didn’t expect to be the narrator of his 2007 National Book Award-winning novel for young adults, THE ABSOLUTELY TRUE DIARY OF A PART-TIME INDIAN.

Alexie had performed his adult novel INDIAN KILLER 13 years earlier, but he hadn’t recorded since. When this opportunity presented itself, he knew he had to do it. “For all kinds of reasons, it had to be me. I’m a performer, and I knew the reader had to be an Indian actor who knew the accent. And even in an early draft, I knew it was going to be a great public piece.”

Alexie’s largely autobiographical book sometimes made his recording a trip through time. His favorite part of reading is his rapid-fire performance of a dramatic basketball game. “I felt like a combination poet and sportscaster.” The hardest part of the recording was reading about his sister’s funeral. “The fictional funeral brought me back to the real funeral. Dealing with the grief again was tough.”

Alexie is used to performing. The only four-time winner of the World Poetry Bout, he remembers “2,000 people in Taos screaming like it was a boxing match.” It can be different performing for audio, but this wasn’t a problem for Alexie. “I just turned the two women I was working with into the audience. In between recording, I bantered and flirted with them and made them laugh. They were a little shocked that an author can really read his work. I think their other experiences were quite opposite.”

In terms of audience, Alexie has been quite impressed with his young adult audiences. “Young adults devour books like they’re at an all-you-can-eat buffet. You have to work hard for them. They can smell condescension from 10 miles away. Young people are so used to being lied to that they know when they’re being lied to. And they won’t put up with it. You can lie to adults far more easily.”

Humor is a great strength in both Alexie’s reading and writing. It seems so embedded that you imagine he must have been born funny. But that’s not true. “If you asked my mom and siblings what it was like growing up with me being so funny, they’d laugh because I was the least funny one in my family. I was the depressed guy playing Dungeons and Dragons in the basement.”

Alexie discovered humor while attending a white school where he and the school mascot were the only Indians. “It was a way of disarming people, charming them. Once I saw its power, I realized I could talk to any group of people about anything as long as I got them laughing first. I can be far more serious now because I’m funny.”--Susie Wilde