"Though I love it, reading a book for audio is the most exhausting work I know. The concentration is so ferocious that after a day in the studio I’ve been known to walk into lampposts and fall asleep face-down in my supper. Worth it, though." 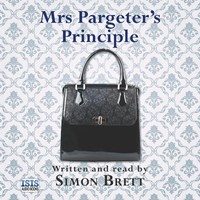 “Do you re-read your own books, Mr. Brett?” It’s a question which, as an author, I’m asked surprisingly often, and it’s one to which, these days, I tend to give the answer, “No and yes.”

No, I’m not one of those writers whose idea of a pleasant evening is luxuriating in his own prose, marveling at the euphony of its juxtapositions, the aptness of each sparkling image. I don’t have that kind of attitude about my work. I enjoy the writing process, but I also enjoy drawing a firm line under the end of a book and getting the wretched thing off my desk. For months of composition I live and dream with the book’s characters. But the minute I finish, I depart abruptly from their world and return to my own.

But the “yes” part of my answer derives from the fact that I do re-read my own books when I record them as audiobooks. I regard myself as extraordinarily fortunate to be allowed to do this as it’s possibly the ultimate authorial indulgence.

The subject matter of my Charles Paris mysteries makes it clear that I’ve always been fascinated by show business. Throughout my teens and at university I was a keen amateur actor, though, even if I’d had the talent — which I’m not sure about — I know I don’t have the right temperament to have taken it up professionally. Reading my own books for audio is wonderful therapy for the frustrated ham inside me.

When I was first asked to record one, I was full of trepidation. I’m not going to be good enough, I thought; my voice’ll give out; it’s going to be horribly embarrassing for a producer who’s used to working with real actors. But as I started, my confidence grew. The reading wasn’t a daunting examination of acting technique; it was a test of storytelling. And telling stories on the printed page is what I do for a living.

I think I’m fortunate that all my writing tends to be dramatic. I write lots of scripts — for radio, television and theater — but even in my prose writing I include a lot of dialogue. And when I write, I hear voices. People look at me a little askance when I say this in public, but what I mean is that I have to find a voice for a character and, once I’ve got it, that guides me in the dialogue he or she speaks. So the jump from putting a story down on the page and telling it out loud is not so great for me as it might be for some other authors.

Also, reading something that one has written oneself is much easier than reading another person’s prose. I know my own speech rhythms. As I re-read a book in preparation — even if it was written more than ten years ago — I know as I turn the page the shape of the sentence I’m reading. I also find that the sentences I stumble on are the ones I remember having difficulty with when I originally wrote them. If I don’t get the rhythm of a line right first time, no amount of rewriting can ever quite erase its awkwardness.

I don’t envy readers approaching another writer’s prose. Their preparation must be very intense as they immerse themselves in an alien style. It’s easier for me. In fact, a couple of years ago, I committed what could have been an unforgivable sin. I went into the studio to record one of my books, MURDER IN THE TITLE and looked through the glass to see the producer clutching a copy of Murder Unprompted. Completely my fault, but I’d actually prepared the wrong book! However, once another copy of the right one had been found, I started reading and finished the recording on schedule. I think that would have been much more difficult for a reader of another writer’s work.

What I love about reading my own books is the intimacy, the feeling of telling a story through the micro-phone to one individual, and the cumulative tension of the narrative’s unfolding. This is a kind of com-pressed recapturing of the creative intensity with which the book was originally written.

But, though I love it, reading a book for audio is the most exhausting work I know. The concentration is so ferocious that after a day in the studio I’ve been known to walk into lampposts and fall asleep face-down in my supper. Worth it, though. I hope they keep asking me to do them.

One final observation . . . Reading my own books for audio has affected what I write. You’ll notice that my current mysteries feature no characters from the Newcastle area, from the Midlands, or from Northern Ireland. Why? Because I can’t do the accents.—Simon Brett