“I’m a great fan of audiobooks. I do a lot of driving across the country, and I always listen to a book. Reading a book on a computer is going to ruin your eyes. I think audiobooks are a leap forward.” 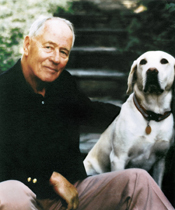 Stephen E. Ambrose is a patriot, arguably the most brilliant, compelling and least abashed patriot publishing history in this country today. He’s also a partisan of the spoken word.

“I’m a great fan of audiobooks,” said Ambrose, who had most recently listened to a Shelby Foote Civil War history. “I do a lot of driving across the country, and I always listen to a book. Reading a book on a computer is going to ruin your eyes. I think audiobooks are a leap forward.”

Stephen E. Ambrose is proud to be American, but unless I miss my guess, he’s not all that proud about being Stephen E. Ambrose. “This is Stephen Ambrose,” he says slowly, deliberately in the introduction to his latest bestseller, NOTHING LIKE IT IN THE WORLD: THE MEN WHO BUILT THE TRANSCONTINENTAL RAILROAD1863-1869. He gives the distinct impression that his now famous name is a braided overcoat he’s put on for the troops. This is a man whose great passion is in the celebration of others.

His history of the Transcontinental Railroad is one such celebration. It’s also “a natural follow-up to UNDAUNTED COURAGE: MERIWEATHER LEWIS, THOMAS JEFFERSON, AND THE OPENING OF THE AMERICAN WEST,” he explained during a recent phone interview. “Lewis and Clark went out and reported that there was no all-water route to the Pacific. They found the Rocky Mountains between us and the Pacific. And so the American
people decided, ‘Well, Hell, let’s build one.’”

They didn’t build a river, but the railroad they put up seemed just as unlikely. Engineers called the project “preposterous.” And yet it was done, and done largely by hand. Workers pierced the Rockies with hand drills, black powder, and nitroglycerin. At Cape Horn, California, the slope was at an angle of 75 degrees, and the American River was 1,200 to 2,200 feet below.

Chinese laborers lowered in baskets of their own construction, drilled holes in the rock face, filled these with powder, lit the fuses, and then signaled to co-workers who pulled them up and away before the blast.

Yes, there was corruption among the backers, according to Ambrose, but it’s vital to realize that they were taking enormous risks. Most financiers wouldn’t put a nickel into such an unlikely project.

Many of us know it was a race, of course, but what a race! The combined workforces approached the totals of the Civil War armies, with the Union and Central Pacific each engaging 15,000 men. They joined the nation East and West as the Civil War had joined it North and South.

Men of violently different races, faiths, and traditions sweated together on the roads. Confederate and Union soldiers, Irish and Chinese were all thrown into the stew.

“I think the best thing that has happened in my lifetime has been the growing diversity of the American people,” Ambrose said. “We’re at a point now where the number one sports hero in this country is named Tiger Woods. He’s black. He’s European. He’s Asian. He’s everybody. We are the world. We come from all over. And what we have in common is that we live in America. And we believe in Democracy.”

This bodes well for the future, according to the great historian. “We just got through the worst century ever in the whole of human history. The twentieth century was the worst ever, and the twenty-first is going to be the best century ever.”

Ambrose is now working on a history of the Fifteenth Air Force, the group that flew out of Italy during the Second World War. He got interested in the fifteenth because of his friendship with George McGovern. McGovern, of course, is known as an outspoken opponent of the war in Vietnam. One might easily conclude that McGovern favored peace at any price, said Ambrose, but George McGovern flew 35 combat missions as a bomber pilot.

Joe Heller was also in the fifteenth and wrote Catch 22 about it, perhaps the wittiest war book ever published. When Heller spoke with Ambrose, he told him frankly, “I never had a bad officer in combat.”

“But Joe,” said Ambrose.“You’re the man who invented Major Major. How can you tell me that?”

“Those people were all inventions,” said Heller.

Ambrose is much more apt to find his glass half full.

When I told him that some feel it’s cheating to listen to a book, as opposed to reading it, he was astonished.

“I can’t even begin to understand such an attitude,” he said.—Benjamin Cheever