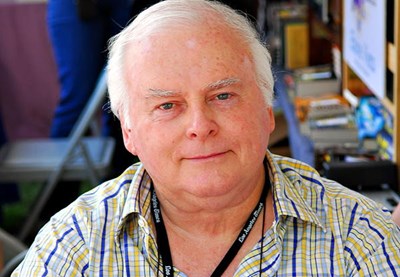 "I’m just as happy if they listen as if they read. I think the spoken tale has an advantage, since the teller of the tale is real, and not just a collection of words on the page.”

With twenty published novels, and more than thirty audiobooks, few writers are as well rep-resented in the audiobook world as Stuart Woods. Half-a-dozen Woods audio-books are slated for pub-lication in 2000, including his latest novel, THE RUN (in abridged and unabridged formats from Harper Audio), and an unabridged reading of his 1981 novel Chiefs (Recorded Books).

THE RUN follows Georgia Senator Will Lee’s bid for the presidency while a militia assassin waits in the wings. Lee has appeared in several earlier novels and is the grandson of one of the lead characters in CHIEFS. In addition to his Will Lee series and several non-series books, Woods has written about Stone Barrington, a one-time cop, one-time lawyer, now filthy rich adventurer. When asked about similarities between Barrington and himself, Woods slyly replies, “I’m not going to tell you.” But he goes on to say, “All my characters have a little of me in them, even the evil ones.” (Maybe especially the evil ones.)

CHIEFS, an epic of the New South spanning fifty years, grew out of Woods’s own childhood memories of growing up in Georgia. “When I was 9 or 10 years old,” says Woods, “I was rummaging in a closet in my grandmother’s house, and I found a shoebox filled with family memorabilia. One of the items was a large brass policeman’s shield, and it had been half shot away with buckshot.” The shield had belonged to his grandfather, William Henry Callaway, who served as chief of police in Manchester, Georgia. “He was later killed by a man in a malarial delirium, who mistook him for someone else. That, and some other stories from my hometown, formed the basis of the novel.” CHIEFS went on to win an Edgar from the Mystery Writers of America for Best First Novel and was made into a six-hour television miniseries starring Charlton Heston and Danny Glover.

When asked how he feels about people listening to his books rather than reading them in print, Woods told us, “I’m just as happy if they listen as if they read, but my vanity prefers that they listen to the unabridged version. I think the spoken tale has an advantage, since the teller of the tale is real, and not just a collection of words on the page.”

Woods and his wife, Chris, have come to enjoy audiobooks during long car trips. “We’ve listened to a lot of Jane Austen and the other English writers on tape, while driving to New York, and I think some of the readers are brilliant actors. The best I ever heard was John LeCarré, reading one of his own novels.”

Performers who have read Woods’s books include Tony Roberts, Debra Monk, Richard Ferrone, Efrem Zimbalist, Jr., Mark Hammer, Frank Muller, George Guidall, Jonathan Marosz, and Ken Howard. Would Woods ever consider doing a reading of one of his books? “I was asked to, in the beginning, but I don’t think I’m a good enough actor. I prefer to leave it to the pros.” As long as Woods keeps writing them, the pros will continue to perform them.
—Steven Steinbock