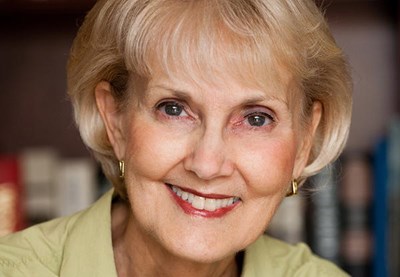 "My love for the world of art started when I was about 8 years old. My step-grandfather took my hand in his gnarled, spidery one, and together we painted a watercolor of a calla lily.” 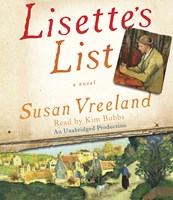 Susan’s Vreeland’s love for the world of art began early. “It started when I was about 8 years old when my step-grandfather came to live with us. We had an art studio for him in the backyard, where I would watch him paint. I remember one day he took my hand in his gnarled, spidery one, and together we painted a watercolor of a calla lily.” That moment, she says, created a passion for painting and sculpture that she nurtured during 30 years as a high school English teacher. The idea for Vreeland’s first novel about art, Girl in Hyacinth Blue, came as she was developing a collection of short stories, each written from the point of view of a character peripheral to an artist: Monet’s gardener at Giverney, for example, and a girl whose back is turned toward the viewer in a Vermeer painting. Imagining the girl to be Vermeer’s daughter, Vreeland wrote a short story that became a critically acclaimed novel.

Vreeland loved the audio version of Girl, narrated by eight actors. “I thought it was brilliant of them to have eight different readers do the eight narrative voices,” she says. “It worked wonderfully.”

Her next novel idea came from a friend who said, “I know what your next novel will be about,” after reading Girl in Hyacinth Blue. “That stopped me in my tracks!” laughs Vreeland. Her friend told her just enough about Artemisia Gentileschi to pique her interest. “She told me that her father had been a painter, that she painted heroic women, and that she had been raped by a painter. That started me researching her.” Vreeland found enough material for a short story, then enough for a novella, and finally more than enough for her second novel, The Passion of Artemisia.

Vreeland has been touring the country with Artemisia—visiting 30 cities in five weeks, reading aloud and answering questions every night. Her voice sounds scratchy on the other end of the telephone wire. But meeting the people who read her work rejuvenates her, she says. “A man came up to me last night after the reading to have his books signed. He had a first edition of Girl and had bought an Artemisia. He said, ‘There are some spectacular lines in Girl that have meant a lot to me, and when my wife and I renewed our wedding vows, we had the minister quote lines from the book.’” Vreeland had begun to write the inscription in his book as the man spoke. “I was writing the line from the book—‘How love builds itself unconsciously out of the momentous ordinary’—as he said, ‘One of the lines that we said during our vows was …’ and he quoted that very line.” Silence for a moment on the telephone, then, “Now that’s pretty spectacular.”

Once she returns to her desk, Vreeland will finalize the long-set-aside collection of short stories that started it all. And after that, she says, will be a novel about Emily Carr, who painted in British Columbia in the early 1900s. “It’s about art, and like Girl and Artemisia, it’s about an absolutely original human being living an unconventional life, a character who breaks the mold.”
—Aurelia C. Scott