"The whole [audio] genre has just exploded! We’re seeing more titles, more unabridged books, and families are discovering them for kids—it’s really exciting. People are not just sticking to what they would normally read at home—they’re going for stories from other countries and venturing outside their customary genres.” 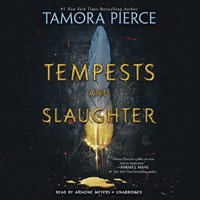 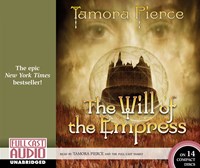 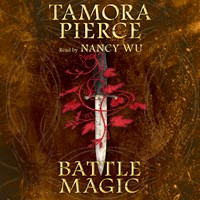 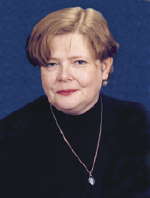 AUDIOFILE recently caught up with fantasy author Tamora Pierce, who is in the middle of a whirlwind of activity, including preparations for the release of her 19th novel, her 4th and 5th audiobooks, a re-release of her first four novels, and the final edits of her 20th book, to be released next spring.

Pierce thinks her background with a radio company makes her listen very sharply to audiobooks. She’s been aware of the audio format “since I first started hearing about them in the early ’80s. The whole genre has just exploded! We’re seeing more titles, more unabridged books, and families are discovering them for kids—it’s really exciting. People are not just sticking to what they would normally read at home—they’re going for stories from other countries and venturing outside their customary genres.”

Although the Song of the Lioness quartet has been popular for nearly 20 years, it’s only in the past few years that Pierce has become personally involved with the recording process. This year she has been both a witness and a participant in recording her books: Listening Library is releasing the final three books of the Song of the Lioness quartet while SANDRY’S BOOK, the first volume in the Magic Circle series, is one of the inaugural tapes of Bruce Coville’s Full Cast Audio company. “The thing I like about single-voice audiobooks is that I was read to as a kid all the time, so listening is like a security blanket. It’s a different thing from a full-cast book. Both have their advantages.”

Pierce likens the author’s role in the recording process to being a “parent in the waiting room, pacing the floor and smoking cigars.” She knows that a large part of the enjoyment of listening to an audiobook depends on having the right voice to bring the characters to life, and she’s happy with narrator Trini Alvarado’s performance. “If you have a good actor, it’s just fun to see what others make of what you’ve done. Single actors can use the full range of their repertoire while full-casts use the full range of voices.”

The Lioness Rampant series has been so well received that Listening Library is contemplating taping the next series, The Immortals. This might have to wait awhile, since the actress was 8-1/2 months pregnant during the taping of LIONESS RAMPANT, the final book in the series. Nevertheless, the difficulties with scheduling a pregnant narrator pale in comparison to the problems associated with juggling a cast of nearly 30 actors, especially when many of them are still in school. Full Cast Audio is planning on taping all four books in the series. Pierce, as narrator, is excited to be part of the production. Coville has assembled a great group of people, she says. “When I close my eyes and listen to the actors, my world is flesh. I don’t think a writer can get a better gift.”—Elizabeth Fraser