"The writing process is a brand new experience each time. Sometimes it’s like pulling teeth and practically impossible. But then you have your real good moments, when you think you’ve done a good job.” 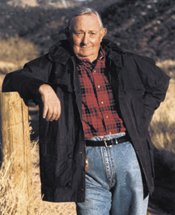 The voice over the phone has a lilt and twinkle to it. “Can you take my Okie accent?” novelist Tony Hillerman asks, chuckling across the miles from his home in Albuquerque, New Mexico, where he and his wife Marie were reveling in what he describes as “the most dazzling, colorful autumn” along the Rio Grande. Hillerman is, of course, the creator of the popular series of contemporary police procedurals rooted in Navajo society, legend, and customs, which features Officers Joe Leaphorn and Jim Chee. Now he is both author of a new memoir, SELDOM DISAPPOINTED and narrator of the 12-hour audiobook version. “The reading experience is just a chore,” he reflects, pulling no punches, which, as the memoir reveals, is clearly his approach to life. “The audio guys make you stop, make you pronounce words the way they’re supposed to be pronounced. They want you to sound like an East Coast Yankee.” Actually, he adds, “It’s easy enough to do. You just sit there and read aloud. But the writing process is a brand new experience each time. Sometimes it’s like pulling teeth and practically impossible. But then you have your real good moments, when you think you’ve done a good job.”

Hillerman, who is 76, read a few of his early novels in abridged form, in his trademark casual drawl. Then other narrators came along—including Jay O. Sanders, Gil Silverbird, Michael Ansara, and George Guidall. Guidall is the only one whose readings are familiar to him. “Boy, is Guidall good at it,” the writer remarked. “And everybody tells me that. But this time, the publisher said, ‘Well, it’s your story, and it would be a lot more valuable if you tell it in your own words.’ So I said, ‘Oh, all right.’”

Hillerman’s epic is a robust, rowdy, and romantic mosaic of reminiscences. It offers insightful word portraits of hard times on the farm during the Depression; perilous moments on the French and German fronts in WWII, where he was seriously wounded handling mortars; the vagaries of campus politics as he served as assistant to a university president; his years as a crime and political journalist; marriage to his wife Marie; and the sheer bliss of blending six natural-born and adopted kids into a fiercely faithful family. Only deep into the narrative does Hillerman turn to the most familiar aspect of his overflowing life—his mystery writing. And, at his editor’s behest (“he twisted my arm”), the tome ends with an ap-pendix, in which the writer lists his works and tells aspects of how each came to be.

The title came from one of his mother’s aphorisms. “Blessed are those who expect little,” she would say. “They are seldom disappointed.”

“It wasn’t the title I wanted,” he observed. “My very first memory—and it’s the very first episode in the book—was my dad, on a hot August day, bringing a black diamond melon home for us. So my title was ‘Papa’s Watermelon, and What Happened Next.’ I thought that was a dandy, but they didn’t like it.”

His memoir is dappled with pieces of advice—such as this, another of his mom’s—“Better to have a skinned knee than to go through life afraid of falling.” The best, Hillerman suggests, isn’t in the book. “Kurt Vonnegut once said that the secret of writing is to leave out the parts the readers skip. But I don’t always follow it. If I want to describe something, I go ahead and do it, and then, hell, let ‘em skip it if they want to.”—Michael J. Bandler