"Jordan spent thirty hours wearing earphones in a cubicle recording the unabridged audio of his memoir. He loved every minute of it, he says, particularly working with his perfection-minded producer." 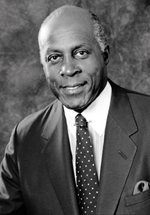 One could say that the new memoir of civil rights leader and lawyer Vernon Jordan began life as an audio production. After developing an outline, he says that he turned on a tape recorder and “just talked and talked and talked.” The result, written in collaboration with author and law professor Annette Gordon-Reed, is Vernon Can Read!, a moving and enlightening journey through pre- and post-civil rights America.

The memoir’s title comes from the world before black civil rights. Home in Atlanta for summer vacation from DePauw University in 1955, Jordan worked as a chauffeur for Robert F. Madox, an elderly white banker. During Madox’s afternoon naps, Jordan occupied himself reading books. Upon discovering this, an astounded—and perhaps unnerved—Madox exclaimed, “Vernon can read!”

Now senior managing director of Lazard Frères & Company, an investment firm, and counsel to a Washington, D.C., law firm, Vernon Jordan loves to read. He even loves to read aloud in a recording studio. He used to read aloud for broadcast when he was executive director of the United Negro College Fund. “We didn’t have any money, so I did the voice-overs for all of our radio advertisements,” he explains. “And for many years, I was a commentator for WINS radio in New York, which involved recording my commentary in a studio. So, the recording experience was not new, but what was different [this time] was that, number one, I was reading my own story, and number two, I had a producer who was interested in perfection.”

Jordan spent thirty hours wearing earphones in a cubicle recording the unabridged audio of his memoir. He loved every minute of it, he says, particularly working with his perfection-minded producer. “She reminded me of Mrs. Amelia Thornton, my English teacher. I felt like a student again, because I would read, and she would say ‘Stop,’ and I would stop. She would say ‘Read it again,’ and I would read it again. Then sometimes she would say ‘Stand up, stretch, drink some water.’ I was completely at her mercy! I did everything she said to do.”

“If you’re looking for how much I enjoyed reading it—I sing in it.” He sings a snatch of the spiritual “Wading in the Water” to demonstrate. “Well, I mean that’s really crazy, because I cannot sing a lick! But that suggests to me that I was having fun.”

Did reading his book aloud distance him in any way from the story it tells? “It could never do that. My book makes you laugh sometimes, and sometimes it makes you sad. I experienced those same emotions as I read it. I relived it in some ways.”

Jordan relived what he calls an American story. “I do not view mine as a black story. So much of the mail that I’ve gotten from white people says that ‘the only difference between my life and your life is that I am white and you are black.’” These are people who tell Jordan that they too grew up poor with few resources, their mothers were their anchors, and church was a central part of their lives. “What I’m saying is there are a lot of people who say, ‘That was my life.’ Now, obviously there is the race thing, and that is part of my book. But I hear from black kids in college, and I hear from white kids in college, and they all say, ‘Thank you for writing this book.’”—Aurelia C. Scott