"Listening to audio allows for a sense of floating along with the story. There’s nothing like being read to or having someone tell you a story." 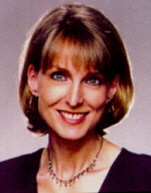 Sammy Keyes, the 13-year-old heroine of Wendelin Van Draanen’s series, is intrepid and determined and has a seemingly endless source of energy—much like her creator. When she isn’t writing, Van Draanen is probably teaching high school computer science, jogging with her Siberian husky, spending time with her family, or singing in a rock band! (Curious readers can hear her perform on the CD that is provided with her newest novel, the eighth in the series, Sammy Keyes and the Art of Deception, which includes an interview with the author, a reading from her previous book, Sammy Keyes and the Search for Snake Eyes, and a rocking rendition of "The Sammy Keyes Song.") Van Draanen received the 1999 Edgar Award for her first book in the series, Sammy Keyes and the Hotel Thief. Seven unabridged Sammy Keyes books are available from Live Oak Media.

We asked the author how listening to an audiobook differs from reading a print version. "To me it feels like they engage different parts of the brain," she told us. "Reading requires more work and concentration. Listening to audio allows for a sense of floating along with the story. There’s nothing like being read to or having someone tell you a story."

"Live Oak’s been great," she told us. Once, they contacted her when they couldn’t find music for songs quoted in Sammy Keyes and the Sisters of Mercy. "That was because I’d made them up! So I sang the songs for them over the phone." Hearing someone else read her words is "very, very strange. I vacillate between loving it and hating it. The hating it part encompasses the endless self-editing process—wishing I’d written something a little bit differently.

The narrator of all the Live Oak readings of Van Draanen’s books is Tara Sands, whose energy and youthfully cute voice help make Sammy Keyes mysteries a wonderful listening experience. I haven’t met Tara, but Live Oak involved me in their selection process, and after listening to quite a few auditions, everyone agreed that Tara was easily the best choice."

AudioFile caught up with Tara Sands on her way to an audition in New York. (See Narrator Spotlight, page 18) "Sammy is like my younger alter ego," she told us. "I wish I had been gutsy enough to do the stuff she does. But I didn’t have to sneak out the fire escape or anything like that. As a character, she’s so easy to get into, because the book is written so well." Tara isn’t as fond of all the characters, like Santa Martina’s gruff cop, Officer Gil Borsch. "That Borsch man kills my throat. Every time I see that he’s coming up, I get nervous. I keep hoping she’ll write him out of the next book. But really, she writes such colorful, three-dimensional characters that she makes my job much easier."

Van Draanen is now at work on the ninth Sammy Keyes title, Sammy Keyes and the Psycho Kitty Queen. "Sammy Keyes is a big part of my life, but I do have other stand-alone books in mind and in production." Swear to Howdy is a middle-grade title released in October. Then a four-book series for younger readers featuring cyber-superhero Shredderman, also from Knopf, is set to come out in the spring of 2004.—Steven E. Steinbock