"When Smith is traveling and reading a book isn’t possible, he’ll listen to an audiobook. 'You certainly get the sense of the book. And if it’s well performed, the drama of the book can be enhanced by a good speaking voice.' ” 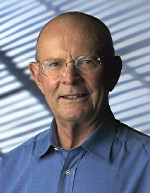 Historical novelist Wilbur Smith is “riding high on the wave” of popular and critical response following the release of THE QUEST, the latest in his bestselling Egyptian series. Smith admits he doesn’t listen to his books in the audio format, but he appreciates the fact that audiobooks are a boon to people who want to keep up with the adventures of his colorful and fantastic characters.

“Of course, audio is a totally different genre, but I’m delighted it’s being done. I find that there are lots of people, busy people who don’t normally read books, who--fortunately for me, unfortunately for them--are stuck in traffic twice a day going to work, and there’s Wilbur Smith with them. Audio has opened up new horizons for me.”

Continuing the series composed of RIVER GOD, THE SEVENTH SCROLL, and WARLOCK, the new novel features the latest adventure of warlock Taita, master of the magical and the mystical. Gifted actor Simon Vance accepts the challenge of creating the sound of the novel’s magical and mythical characters.

Did Smith provide notes on the production of the audiobook? “I didn’t help Simon with his performance, and he didn’t help me with writing the book. We each stick to our own area. An author can sometimes be overprotective of his work. In most contracts I’ve signed, I’ve waived any sort of author’s privilege to interfere with the rendition as an audiobook. I leave that to the experts in the field.”

Is this the last adventure for Taita? Smith says he’s still fascinated with the magician, so expect more stories. “Taita has become a companion. He’s someone who leads me and goads me forward with the story. He keeps me endlessly fascinated with what he’s going to do next.”

Smith continues, “We are wandering minstrels; we are storytellers of the tribe. A lot goes back to before the written word, that skill of telling stories. I look upon myself entirely as a storyteller. I don’t have any pretensions of literary genius or being better than any other storytellers. I tell stories, and I try to make them so exciting for myself that other people get carried along with the stories as well. All of us are suckers for a good story.”--Randy O’Brien