"On audio, it’s clear that it’s the man and not just the voice who allows his words to span the worlds of business and religion like few others I’ve heard." 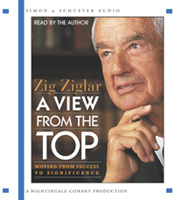 It would be a mistake to cast Zig Ziglar as just a sales trainer or motivational speaker. It’s true he’s spent 32 years training countless people how to succeed in the relentless world of sales. But in a telephone interview from his vacation home a hundred miles east of Dallas, he explained how a key turning point created a broader mission for his life.

Raised in a Mississippi town so small they “hung a huge mirror at the end of Main Street to make the town look bigger,” Hilary Hinton Ziglar was the first in a family of 12 to graduate from high school. At the age of 5, after his father died, he picked up an important life lesson selling produce from the farm and later at a Piggly Wiggly: “I learned there was a direct correlation between what I did and what I received.” It helped that his stalwart mother held him accountable for everything he did, forbade him to work on Sunday, and straightened out his attitude whenever it went astray. When, as a teenager, Hilary, her tenth child, asked her why she had so many children, she replied, “Well, son, where do you think I should have stopped?”

Ziglar started selling cookware after stints in the Navy and college but struggled until he got some pointed advice: “P.C. Merrill persuaded me that I could be the national sales champion if I did two things— believe in myself and go to work on a regular schedule—get organized, in other words. After that I was number two for the year. Until then I had seen myself as the little guy from the little town who would struggle all his life. I knew the basics—the salesman was trained—but the man wasn’t ready.”

At some point he discovered a talent for speaking and got a boost in 1968 when Mary Kay Ash asked him to train her cosmetics managers. Audios made for the same group were wildly popular, and as his reputation spread, he began a full-time speaking career in 1970.

But the struggling continued until a breakthrough occurred: “When I became a Christian on July 4, 1972, another dimension was added that had been missing. Before then I was broke and in debt, my career was limping along—and I do mean limping. When I started teaching biblical principles, that’s when my career exploded.” He became devoted to the discipline of following absolute values. “Some things are right, and some things are wrong. No business owner would knowingly hire an accountant or treasurer who said he was relatively honest.” He offers the same advice to anyone in pain trying to change his or her life: “Discipline isn’t painful. Pain is what you get when you don’t have it.”

Married over 50 years to his wife, Jean, and very close to his children and grandchildren, Ziglar speaks to 70 corporate groups every year and feels blessed by the people who support him. His first book, SEE YOU AT THE TOP, still sells 50,000 copies a year, and almost all his audios are perennial bestsellers. “God gifted me with a voice that people seem to relate to.” But on the telephone and on audio, it’s clear that it’s the man and not just the voice who allows his words to span the worlds of business and religion like few others I’ve heard.—Thomas Walken