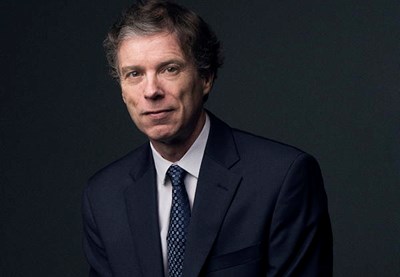 "I travel to different worlds in every book. Each book is an adventure."

Simon Vance began his recording career at the age of 6 when he read Winnie-the-Pooh aloud into a microphone. At age 11 he was given his own tape recorder and mike.

"I was very much into the BBC Radio comedy shows, so most of what I did was to make up silly stories and record them using lots of silly voices." He laughs. "That set the stage for my career."

In his 26 years as a narrator, the Englishman with the gorgeous voice and remarkable facility for characterization has recorded hundreds of books for many producers. Recent titles include Oscar Wilde's THE PICTURE OF DORIAN GRAY , which is a 2009 Audies finalist, Dickens's GREAT EXPECTATIONS , also an Audies finalist and Earphones Award winner, Trollope's The Warden, Kate Summerscale's nonfiction THE SUSPICIONS OF MR. WHICHER , and Stieg Larsson's mystery bestseller, THE GIRL WITH THE DRAGON TATTOO . The last three all won Earphones. The ever-growing stack of prizes encourages Vance, who, despite his popularity, says, "I'm very judgmental, and I often find it too painful to listen to my own work. I only accepted that I was any good at this after getting my first Audie Award a couple of years ago."

A fan once asked Vance if he records all of one voice and then all of another and splices them together. Well, no. But as to how he makes multi-character conversations so believable, he sounds as mystified as the guy with the splicing question. "I really don't know." When pressed, he says, "For an actor on stage, the important thing is to listen to what the other actors are saying. So in an audiobook, while I'm reading one person, I picture the other person listening. It's like playing chess against myself--be one person while imagining the other, back and forth again and again."

Sounds a bit like the skill needed for Xbox, which Vance plays with his 14- and 18-year-old sons when he's not recording audiobooks. "There's a great game called "Left For Dead,' which is all about killing zombies!" Then, as if that doesn't sound quite right--"My sons also introduced me to "Rock Band.' My oldest son is on the guitar, my youngest on the drum, I fit in with the bass." Pause.

"We turn it up really loud."

So loud one might hear it in outer space, which comes to mind because Vance has been a fan of the BBC science-fiction show "Dr. Who" since it first aired in 1963. "For me, reading audiobooks is a little bit like being a traveler in time and space. I sit in my studio, my equivalent of Dr. Who's TARDIS spaceship, and I travel to different worlds in every book. Each book is an adventure. Starting a new one is like opening the door of the TARDIS and stepping foot on a new planet."--Aurelia C. Scott

2008 :  Simon Vance astounds us again and again, and AUDIOFILE's review of THE GIRL WITH THE DRAGON TATTOO says it all: "His voices are so natural and fit so well with their characters that the listener is completely transported into the story." What more could an avid audiobook listener ask from a narrator? Bravo, Simon.

2006 :  "Ah. Simon Vance," Kate Fleming sighs. "What do I love about Simon Vance?" Kate has directed him in several audiobooks, including L.M. Boston's THE STONES OF GREEN KNOWE and Elizabeth Nunez's PROSPERO'S DAUGHTER . "Without resorting to vocal gymnastics," she says, "Simon is one of those narrators who can tap into a vast reserve of imagination to find the right feel for his characters."

Simon says PROSPERO'S DAUGHTER was an enjoyable challenge with it's "three distinct sections with different first person accounts of the same events--one a native of the Caribbean and another a young girl!" The British-born Audie winner "absolutely loves" recording audiobooks. "They're my mainstay," he says. Indeed, he has had to curtail what he calls "tramping the boards" on Bay Area stages lately because he is in such demand as a narrator. Working under the noms de guerre of Robert Whitfield and Richard Matthews, as well as his own, he has impersonated Jesus and Buddha in THE LOTUS AND THE CROSS , a whole pack of scheming Aussies in THEFT, Jesus again plus Oscar Wilde and Blaise Pascal in SENSE AND SENSUALITY , Yankee dissidents in THE WHISKEY REBELLION , and a cast of snobbish Brits in the comic A SPOT OF BOTHER , among many other dramatis personae.

AudioFile's reviewers have praised Simon's ability to capture "the listener's ear in the first few minutes," his "unique voice and vision for every character," and his "subtle intonation." His clarion baritone voice gives him a youthful sound, belying his 22 years as a narrator. He began his career in England by reading for the blind and delivering the news for BBC. He relocated to the U.S. so that his then-wife, an American, could be near her folks. "In the long run it was a good idea," he says. "I do love it here now." Remarried, he remains near San Francisco where his children live, recording in his own home studio or shuttling to Oregon, Seattle, or New York for various clients. "This has been a most enjoyable and successful audiobook year for me," he told us. "The other aspects of my acting career have taken a bit of a back seat, but I will never stop putting myself 'out there' given the chance. I'd like to work more in film." Ultimately, what he desires most in his professional life is "steady work and," he hastens to add, "the respect of my peers. Narrators are such a great bunch--Kate Fleming, Grover Gardner, Scott Brick . . . I could go on, it's a growing list--I feel honored to be considered in their company."--Yuri Rasovsky

When Simon Vance was about 10 years old, his father gave him a tape recorder, and he's been "playing with a microphone and making silly voices" ever since. Simon won the 2006 Audie Award for Science Fiction for Richard K. Morgan's MARKET FORCES . "You venture into so many different worlds. From week to week you don't know which planet you're going to be on, which country you're going to be in." Simon began his audio career by reading audiobooks for the UK's Royal National Institute for the Blind for 10 years before coming to the U.S. in 1992. Then, he began reading for Blackstone Audio (as Robert Whitfield) and Books on Tape (as Richard Matthews). Simon estimates he's "closing in on 300" audiobooks. He just finished recording THE SECRET RIVER, an Orange Award winner by Kate Grenville. "It's the story of a fellow and his family who are sent as convicts to New South Wales at the turn of the nineteenth century. It describes the first meetings between Aboriginals and whites in Australia. It's a terribly moving book." Among his other recent projects: THEFT by Peter Carey and the newest in Jasper Fforde's "nursery crime" series, THE FOURTH BEAR.