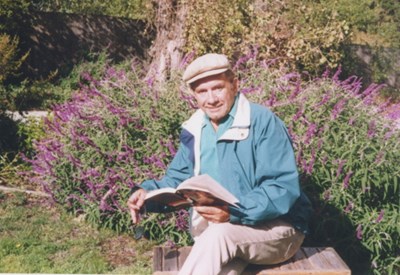 Listen to David's reading of THE VIRGIN QUEEN

"I really believe I was born to record audiobooks."

December 2005: Listeners will be saddened to learn of the passing of one of the great Golden Voices. After a lengthy battle with throat cancer, David passed away at his California home in September 2005. David's cultured British voice, his flair for accents and dialects, and his comedic timing made him one of the industry's most sought-after narrators. David recorded over 700 audiobooks, was nominated for a Grammy, and received numerous AudioFile Earphones Awards. He was as at home with mysteries and humor as with histories or the classics. In one of his last interviews, David said, "I really believe I was born to record audiobooks." We couldn't agree more. We will miss him.

December 1997:  From an early age David Case spent hours mimicking the great actors and comedians of Britain's radio and theater and doing "funny voices" and skits with his brother. At 21, he requested a tape recorder for his birthday, a device his parents had never heard of. After performing for years in many BBC Radio plays, David came to this country in 1976. Wanda McCaddon introduced him to work she was doing with dramatizations for The Mind's Eye. David and Wanda's collaborations continued, and they are now partners as audio publishers of Big Ben Audio. The narration of audiobooks became a passion for David, and after 12 years he has lent his voice and talents to more than seven hundred audiobooks for Books on Tape, Blackstone Audiobooks, Audio Editions, Durkin Hayes and others. He also records as Frederick Davidson, Edward Raleigh, James Nelson, and Ian McKay, using the names for different series or publishers. David's favorite author is Anthony Trollope, whose books seem to "have been written for an audio reader." Trollope and Dickens provide David with full rein for his character voices. Peter Mayle is a contemporary favorite who provides an instant vignette of his characters, real or imagined, making them a pleasure to interpret.

December 2004: David’s audiography includes more than 800 audiobooks—-an immense achievement. While David recorded it years ago, in this issue, Steve Leveen mentions his powerful reading of THE DAY OF THE JACKAL as a significant moment in his conversion to audio. David is in better health this year and full of energy; he recently relistened to his recordings of John Galsworthy’s Forsyte Saga titles IN CHANCERY, THE MAN OF PROPERTY, and TO LET. Great classics never go out of style.

December 2003: After nearly 30 years of audiobook work and 800 recordings, David is giving his voice a little break from his usual heavy recording schedule. Dostoyevsky’s THE BROTHERS KARAMAZOV and THE ADVENTURES OF SHERLOCK HOLMES are among his projects this year. We know David brings his usual verve and insouciance to these titles.

December 2002: David seems determined to record all (44) novels of Anthony Trollope, and he completed THE WAY WE LIVE NOW in 2002. "Trollope seems to have designed his characters and situations to be read aloud," says David. Another long-term project that David has already begun: Proust's REMEMBRANCE OF THINGS PAST--unabridged, of course.

December 2001: David is recording again after a slow recovery from illness last year. He is restricting his recordings to mostly history and biography. Several were released this year including Christopher Hibbert's AGINCOURT , WOLFE AT QUEBEC , and THE VIRGIN QUEEN : Elizabeth I, Genius Of The Golden Age. He also recorded ROSETTI, an early work by Evelyn Waugh, and an autobiography of Waugh's son, Auberon, WILL THIS DO? Another title of note is the audio duet David and Wanda McCaddon (as Donada Peters) performed in PORTRAIT OF A MARRIAGE by Nigel Nicolson. Not one to be deterred by lengthy projects, David has undertaken recording the entirety of Marcel Proust's REMEMBRANCE OF THINGS PAST.

December 2000: David was immensely pleased that his reading of ELEGY FOR IRIS was a finalist for Best Unabridged Nonfiction at this year's Audie Awards. Early in the year David completed his usual output of histories and biographies, including those on Laurence Olivier, Lord Nelson, and Mussolini. KING RAT by James Clavell received an Earphones Award from AudioFile. Among the books outside these areas, David read two modern novels, Nick Hornby's HIGH FIDELITY and HEADLONG , a funny piece by playwright Michael Frayn. David looks forward to 2001 and new assignments in the work he loves.

December 1999: David Case has recorded more than 800 audiobooks as Case for Books on Tape and as Frederick Davidson for Blackstone. His facility with characters and accents makes his Dickens titles a treat -- try his recent OUR MUTUAL FRIEND .

December 1998: David, recording as Frederick Davidson and Edward Raleigh in addition to his own name, has logged more than 800 hours of recording this year and routinely takes on some of the longest audiobook projects. He's recently completed the entire FORSYTHE SAGA by John Galsworthy, which consists of three trilogies. David manages to envision each of the characters he encounters. He maintains that he must "go for it" in terms of character voices as he can't imagine reading without injecting different personalities into even the driest history. His recordings of P.G. Wodehouse, Robertson Davies and Dickens benefit from his approach. In biographies, he sometimes listens to actual recordings of the voices of the characters; this familiarity makes for lively and effective listening.