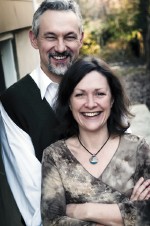 Sean Pratt, who also reads as Lloyd James, is married to Shannon Parks, who is also known as Marguerite Gavin. "Ah, the magic of living with your coworker," says Sean.

Michael Kramer, aka Nick Bernard, is married to Jennifer Mendenhall, best known in the audiobook world as Kate Reading. Michael says, "We're in the same profession, so we understand each other completely." 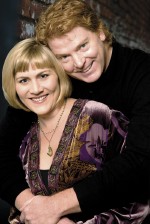 "Or when we're both reading books about sociopathic killers."

"Or when one of us thinks the other one has a better book."

"Or when one of us comments on the other's work."

The few times Sean and Shannon made a "helpful critique," one of them ended up sleeping on the couch. Their good friends, Jennifer and Michael, offer each other constructive advice only when asked, and even then, "We tread carefully."

The two couples, award-winning narrators all, credit Grover Gardner with introducing them to the profession. An AudioFile Magazine Golden Voice, Gardner is also the Studio Director for Blackstone Audio. Each couple still reads for Blackstone Audio, as well as other publishers. And modeling on Grover, they work from home. "My day ends when I hear the school bus," explains Shannon, mother of nine-year-old Olivia. "You're always around to listen and nurture," adds Sean. "Then again, I'm not sure our kids believe that we work!"

But work, they do. Sean tells aspiring audiobook actors to practice by randomly pulling a book off their shelf. "Skim through it. Look up the pronunciation of every word you're not sure of. Then start to read aloud. If you stumble, begin a sentence again. If your throat gets scratchy, start again. Do that for four hours a day every day for four weeks and then come tell me you want to do this for a living."

Whether or not they know it to be work, the two couples' children love their parents' profession. Olivia began claiming her own time in the recording studio a while ago. "She sings and talks in there," says Shannon. "Makes up her own stories and records them. I think she's already planning for what she needs to do to get into Juilliard!"

Michael and Jennifer's son, Henry, is a "story hound." "He's fourteen now and we've been reading to him since he was six months old. The minute he could talk, he'd say, 'I want the voices!'" remembers Michael. "If I used the 'wrong' voice, he'd remind me. 'The man sounded deeper last night', or whatever. He was an exacting director!"

Shannon Parks and Sean Pratt share a studio, which Shannon says is possible because, "Sean is very regimented and I'm more chaotic." How's that again?

"He records for five absolutely predictable hours a day. I often work into the wee hours." Until a year ago, Michael and Jennifer also shared a studio. "But we got tired of being snippy. We'd challenge each other. 'Are you going in? Because if you're not, I will, because I'm ready and I have a deadline.'" So they bought a modular 'vocal box' and put it in the guest room. That's where Michael records. Jennifer works in their basement studio, which resembles a geometry puzzle.

"To keep the echo down, it's a box within a box with none of the walls parallel. It looks like crap, but it functions brilliantly."

That is all that matters, because the magic happens inside. And though this be a Valentine's Day story, our two loving, talented couples say that the magic is between actor and microphone. Jennifer offers a husky laugh as she explains for the group, "There's something really sexy about being alone with a microphone. It is unbelievably intimate. You, your breath, no watchers. You go as far as you can stand it and then you go further."--Aurelia C. Scott

Photo courtesy of the narrators