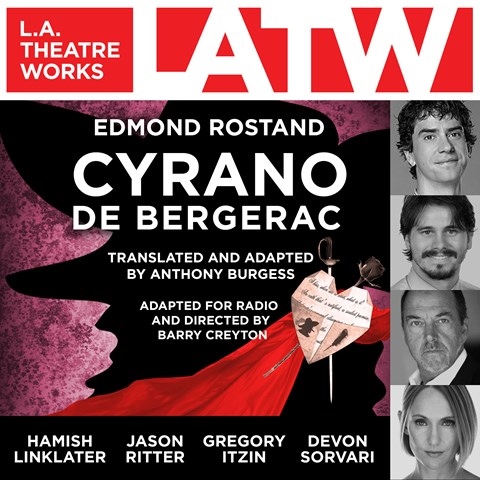 L.A Theatre Works gives a briskly energetic performance of Rostand's bittersweet romance about the heroic but unlovely poet and swordsman Cyrano and his hopeless love for the beautiful Roxane. The cast handles Burgess's rhyming version adroitly, without making listeners uncomfortably aware of the verse structure--though this adaptation of Burgess's adaptation seems curtailed and a bit abrupt. There's some weakness in the minor roles, and Linklater's Cyrano lacks the refinement one expects from the poet. (It's hard to imagine Cyrano saying "gonna," as Linklater does.) But the main players convey the drama's emotions admirably, hold listeners' attention, and keep the piece lively. The program includes an informative conversation with a biographer of Rostand. W.M. © AudioFile 2016, Portland, Maine [Published: NOVEMBER 2016]