Home»Reviews»QUENTIN CUNDICK AND THE WEB OF MACHINATIONS 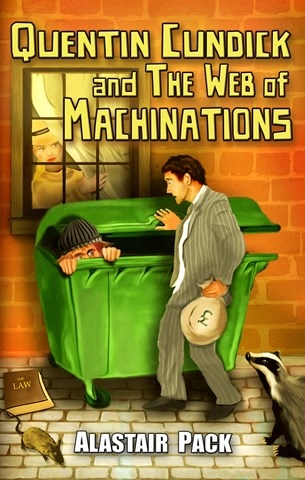 QUENTIN CUNDICK AND THE WEB OF MACHINATIONS

Quentin Cundick is no average lawyer/crook/hero, and narrator Pab Roberts deftly presents him in all his guises. On one awful day when officials foreclose on Cundick's house, he steals a library book (to learn his rights), robs a bank, steals a cab, and ultimately goes on the run. Laugh-out-loud sound effects of a hilarious public address system and haunting robotic voices are zany additions to this Terry Pratchett-like concoction. Roberts is outstanding with an array of accents, goofy wordplay, and dramatic pronunciations of words such as "yawn" and "sigh." The surprises never stop until the conclusion, when listeners hear Cundick verbally take on the Binary Levers, who want the Internet to rule the world. S.G.B. © AudioFile 2015, Portland, Maine [Published: APRIL 2015]