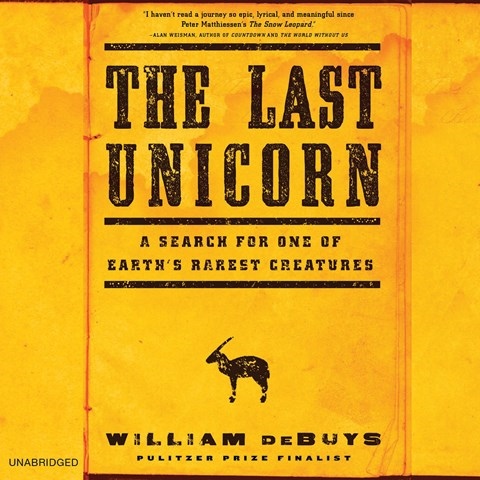 THE LAST UNICORN A Search for One of Earth's Rarest Creatures

William deBuys joined explorers on an observation trek aimed at protecting the elusive, rare saola, a forest-dwelling bovine discovered only in 1992. He develops fascinating pictures in the minds of listeners as he recounts his journey through the saola's habitat in Laos. His gentle voice brings alive descriptions of the landscape and experiences such as the strange wonder of not recognizing a bird that later proves familiar. He makes the horror stories--encounters with leeches and ants--as unnerving as they must have been in real life. A rare vehemence comes out as he describes the continuing toll of Vietnam War-era explosives on the people he meets. The imagistic writing lends itself well to the audiobook form. J.A.S. © AudioFile 2015, Portland, Maine [Published: JUNE 2015]