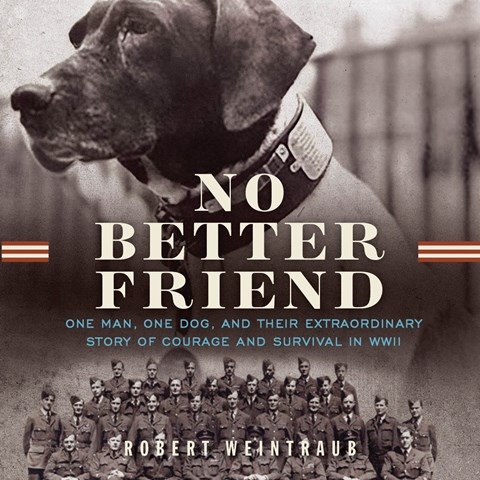 NO BETTER FRIEND One Man, One Dog, and Their Incredible Story of Courage and Survival in WWII

Harrowing and inspiring. Dan Woren narrates the true story of Judy, a scrappy dog that served the Royal Navy at sea and later became a POW of the Japanese during WWII. Beginning her tour of duty on a royal gunboat, Judy quickly ingratiated herself with the seamen. Much of the story is built from first-person accounts and memoirs of soldiers from several nations, and Woren tailors each personal account with the appropriate accent. Woren balances his energy between enthusiasm for Judy's exploits and sobering descriptions of life as a POW. While the accents aren't always perfect, they succeed at reminding the listener just how many nations were affected by the war, not to mention how many different soldiers were impacted by Judy. A.S. © AudioFile 2015, Portland, Maine [Published: DECEMBER 2015]