Home»Reviews»THE TAPPER TWINS GO TO WAR (WITH EACH OTHER) 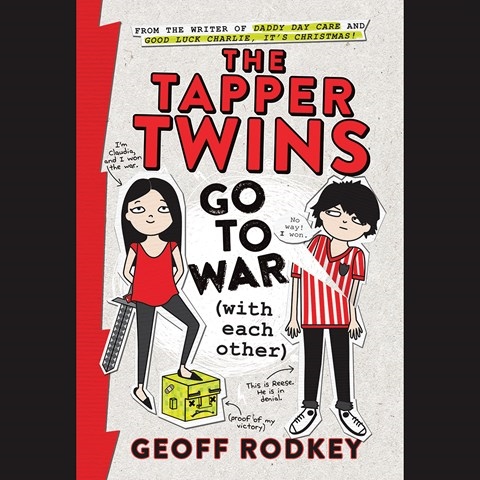 THE TAPPER TWINS GO TO WAR (WITH EACH OTHER)

A full-cast narration brings together the wild and crazy war between twins Claudia and Reese in this start to a new middle-grade series. Recounting the story as an oral history, Claudia uses text messages, recordings, interviews, and more to explain why she went to war with her brother. Offering a full cast to narrate truly gives the audiobook the sound of oral history as well as creating the opportunity to give each character a well-rounded and hilarious reading. From Claudia's insistence that the war has nothing to do with the cute new exchange student to Reese's obsession with his online video game world, each narrator makes his or her character stand out. The full cast also works well in narrating the text messages and notes from parents. A delightful listen is made even more so by a stellar cast. S.B.T. Winner of AudioFile Earphones Award © AudioFile 2015, Portland, Maine [Published: JULY 2015]