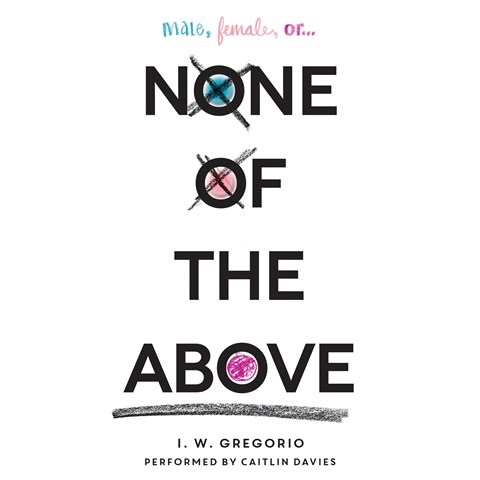 NONE OF THE ABOVE

by I. W. Gregorio | Read by Caitlin Davies

Narrator Caitlin Davies transforms what could be a didactic novel into an emotional journey. High school senior Kristin Lattimer has an adoring boyfriend, a sports scholarship, many friends, and a surprising homecoming queen win. Then painful first sex sends her to a doctor who discovers she's intersex. At that point, Davies's initial portrayal of Kristin's confident openness crumbles to confusion. Poignancy builds as Kristin's entire school learns of her condition. Davies's depiction of the resulting high school horrors is heartbreaking--Kristin's boyfriend's homophobic rejection, the scorn of bullies who hurl the word "hermaphrodite," and a former friend who seems to use Kristin's misfortune to her own advantage. All these establish Kristin's self-imposed isolation and gender questioning and set the stage for her path to self-acceptance and stability. S.W. © AudioFile 2015, Portland, Maine [Published: JULY 2015]