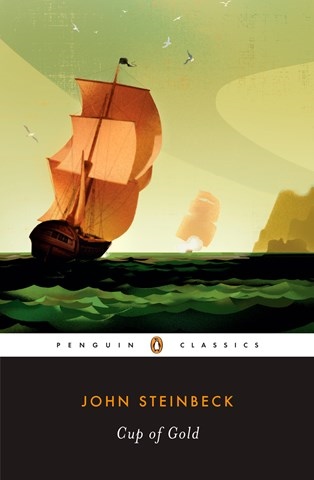 CUP OF GOLD A Life of Sir Henry Morgan, Buccaneer, with Occasional Reference to History

Narrator Ronan Vibert’s bravura performance enhances the poetry and romance of Steinbeck’s first book, a novelization of the life of Henry Morgan, seventeenth-century privateer, though even his talent can’t always transcend the novel’s occasional silliness. He imbues the dialogue with quiet, intense emotion but stays appropriate to the characters and their situations. This restrained passion adds energy and color to the text, and draws the listener in. His character voices are skillfully varied, usually, and his variety of British accents is excellent, though his non-British women tend to sound the same. His tonal interpretations of the text show both taste and intelligence. Vibert does this minor work in the Steinbeck canon proud, turning the book into a play performed in the intimacy of the listener’s mind. W.M. Winner of AudioFile Earphones Award © AudioFile 2015, Portland, Maine [Published: AUGUST 2015]