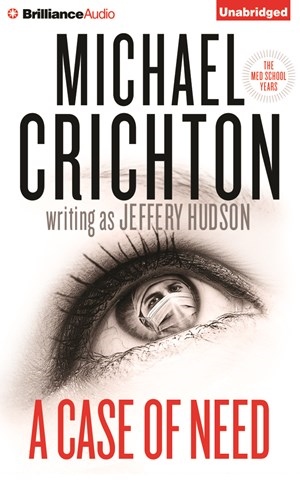 A CASE OF NEED

Michael Crichton's award-winning debut mystery, published under a pseudonym, transports listeners back to1960s Boston, when smoking was legal and abortions were illegal. Narrator Nick Podehl perfectly renders pathologist John Berry's fears when his close friend, Dr. Lee, is arrested for the botched abortion and death of Karen Randall. His nuanced portrayal of the girl's father's outrage and stunned grief is fully convincing. He uses a measured pace and tone to portray Berry's investigation to prove his friend's innocence, which includes a shocking revelation: Karen didn't need an abortion--she wasn't pregnant. The medical terminology, which Podehl delivers well, reflects the medicine of the times and is explained in the seven appendices that complete the book. G.D.W. © AudioFile 2015, Portland, Maine [Published: JULY 2015]