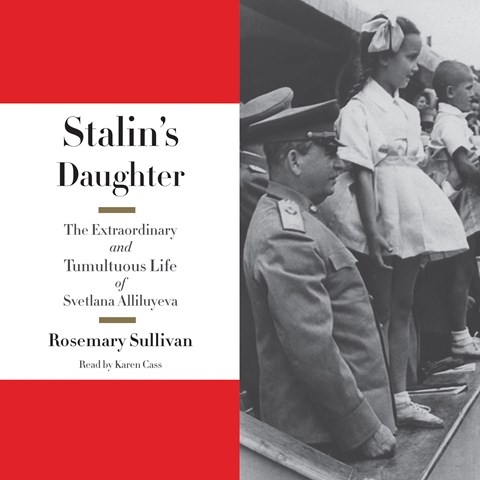 STALIN'S DAUGHTER The Extraordinary and Tumultuous Life of Svetlana Alliluyeva

The damage that dictators do to their countries and to the world is bad enough. What they do to their families is also criminal. This audiobook, an exhaustively researched historical account, tells the story of Stalin’s daughter. Karen Cass narrates with skill, clarity, and verve. While Alliluyeva herself was protected by Communist Party elitism as a girl, her father exiled her mother, two brothers, and her lover to Siberia. In 1967, she left her children behind and defected to the U.S. Cass’s lively British accent makes the story less a litany of danger and terror and more a story of a woman who slowly but surely learns the truth and has to carry it with her for the rest of her life. R.I.G. © AudioFile 2015, Portland, Maine [Published: NOVEMBER 2015]