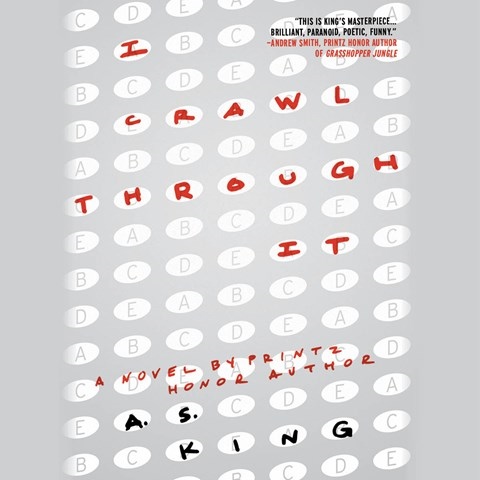 I CRAWL THROUGH IT

A surrealistic novel dramatizes four bright teens who can barely make their way in an increasingly senseless world. The author reads in a deadpan tone as she depicts the "slings and arrows" coming at them from all fronts. Stanzi suffers from absentee parents--except during family vacations, when they visit the sites of school shootings. Gustav copes by building an invisible helicopter, and China has "swallowed herself" after a terrible experience with a boy. The fourth character's hair grows when she lies. Even their high school, with its continual bomb threats, seems to be under siege. King's striking imagery is haunting, but, overall, her morose monotone doesn't help listeners distinguish the quirky characters, imagine the strange situations and settings, or understand the intricate, sometimes puzzling plot. S.W. © AudioFile 2015, Portland, Maine [Published: NOVEMBER 2015]