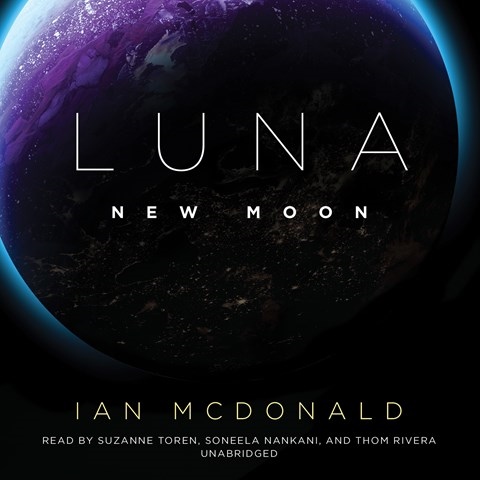 Approximately 50 years after the establishment of the five major dynasties on the moon, the matriarch of the Cortas family is attempting to preserve her legacy at the end of her long life. As the main narrator, Thom Rivera deals the most with the audiobook's Portuguese words, particularly character names, which figure prominently. Seemingly in an attempt to be authentic, he emphasizes the Portuguese to the point of distraction. Suzanne Toren provides a compelling narration of the portions of the book told from the point of view of the matriarch. She delivers her part with a nuanced mix of nostalgia, steely determination, and dominance. Soneela Nankani's performance also succeeds. This complex tale presents a large cast of characters, explicit sex, and family drama in a harsh environment that breeds strong competition and greed. J.E.M. © AudioFile 2016, Portland, Maine [Published: APRIL 2016]