Home»Reviews»WHEN A SCOT TIES THE KNOT 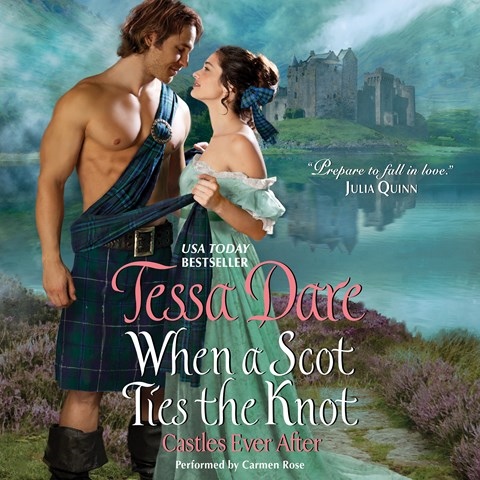 WHEN A SCOT TIES THE KNOT Castles Ever After, Book 3

Narrator Carmen Rose sets the scene for the witty banter between two headstrong protagonists. When 16-year-old Madeline Gracechurch pens love letters to Captain Logan MacKenzie, her imaginary fiancé, she avoids the pressure of being presented to society. Years later, when she kills Logan off, the newly widowed Madeline thinks she's free from social obligations and retires to work on her drawings--until a handsome Highlands soldier appears at the doorstep of her Scottish castle. Rose gives shy Madeline a dignified English accent and the roguishly commanding Logan, a Scots brogue. Though Rose's pacing can be rushed at times, she takes things slow when it comes to the sensual love scenes and captures the heat of this steamy Regency romance. M.F. © AudioFile 2015, Portland, Maine [Published: OCTOBER 2015]