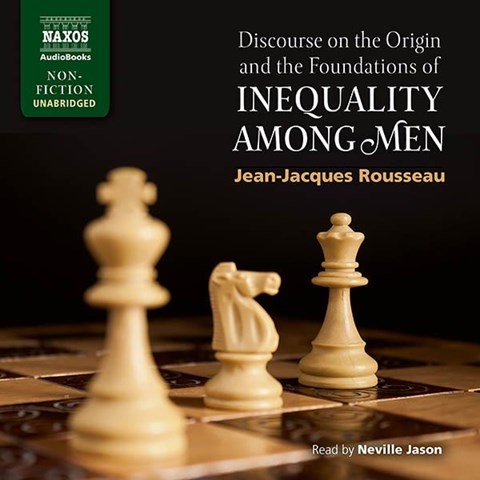 DISCOURSE ON THE ORIGIN AND THE FOUNDATIONS OF INEQUALITY AMONG MEN

Rousseau's early essay on the origins of man and society--using biology, anthropology, and linguistics--is now mostly of historical interest, but Neville Jason's skilled reading helps keep it enjoyable. His pleasant voice, distinguished-sounding accent, and somewhat rolling style--at the same time precise and conversational, intellectual but easygoing--matches Rousseau's essayistic manner. Jason avoids becoming ponderous, moving the text fluidly but at a measured pace, which is helpful for the listener who is grappling with the ideas. He clearly understands what he's reading and is able to give phrases and sentences their proper intonation and emphasis, which also aids the listener's understanding. Audio may not seem the obvious choice for philosophy, but Jason's narration makes it work. W.M. © AudioFile 2015, Portland, Maine [Published: OCTOBER 2015]