Home»Reviews»FANS OF THE IMPOSSIBLE LIFE 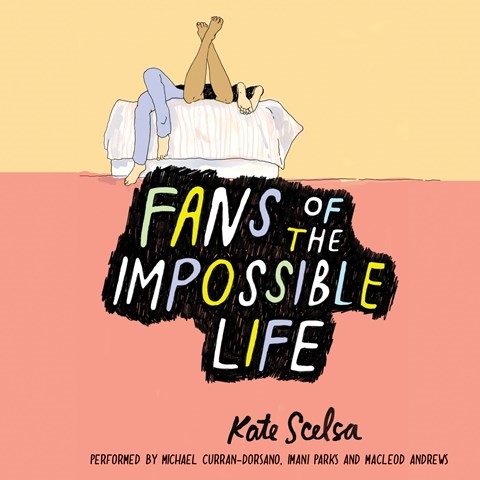 FANS OF THE IMPOSSIBLE LIFE

Narrators Michael Curran-Dorsano, Imani Parks, and Macleod Andrews deliver an intimate story of friendship told from three perspectives. Jeremy, Mira, and Sebby, each recovering from past traumas, develop a bond during their sophomore year. The shifting perspectives are seamless, allowing the characters to develop within each chapter. As Jeremy, the shy outcast, Curran-Dorsano uses a soft, light voice and a tentative delivery to underscore Jeremy's vulnerability. In fitting contrast, Andrews matches his tone to Sebby's insouciant, confrontational personality. With softer tones and a bit of hesitancy, Andrews captures the uncertainty beneath Sebby's defiance. Addressing themes of depression, bullying, suicide, substance abuse, and sexuality, this is far from a light listen. Fortunately, the shared performance respects the weight of the story. A.S. © AudioFile 2015, Portland, Maine [Published: NOVEMBER 2015]