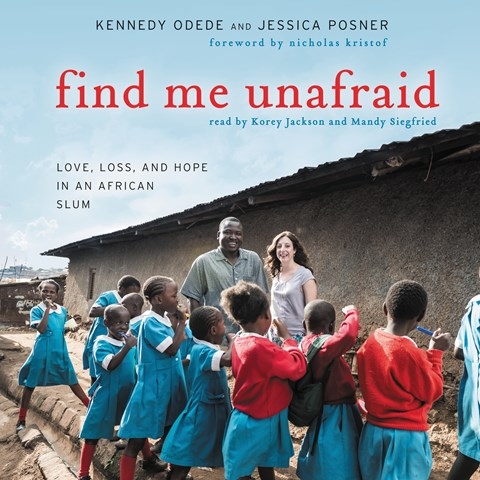 FIND ME UNAFRAID Love, Loss, and Hope in an African Slum

This inspiring story of two young people's efforts to meaningfully help the underprivileged is fittingly narrated with elegance and respect. The stark difference between Korey Jackson's voicing of Kennedy Odede and Mandy Siegfried's reading of Jessica Posner underscores the drastically disparate worlds from which the authors originate. Jackson's strong, confident tone for the scenes in Kenya authentically portrays a young Odede, who is established as a beloved leader in his slum of Kibera. Jackson then switches to a tone of childlike wonder and amazement when Odede travels to the United States for the first time. His convincing portrayal is funny and heartwarming as well as startling when listeners hear how America appears to an outsider. A wonderful production worthy of listening to multiple times. J.F. Winner of AudioFile Earphones Award © AudioFile 2015, Portland, Maine [Published: NOVEMBER 2015]