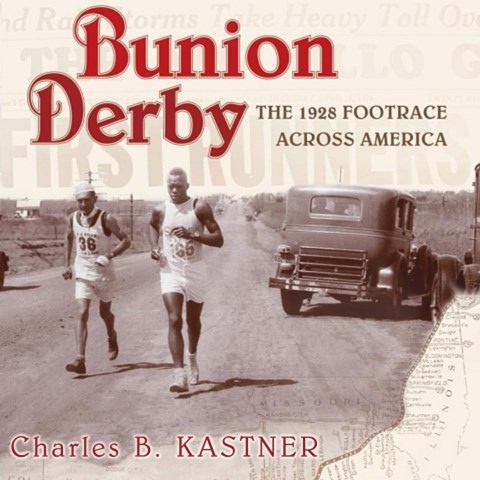 BUNION DERBY The 1928 Footrace Across America

by Charles B. Kastner | Read by Andrew L. Barnes

Listeners will be transported to 1928 and relive a fascinating event in American history, thanks to the skillful delivery of narrator Andrew L. Barnes. The Bunion Derby was the brainchild of huckster Charles C. Pyle, who is vividly brought to life in this audiobook. For the Derby, 199 men-- including blacks, immigrants, and foreigners--attempted to run 3,400 miles from L.A. to New York City for a $25,000 prize. In addition to hearing about the race, listeners learn about Jim Crow laws, places along the trail--which included Route 66--and many of the runners. Pyle's poor treatment of the athletes and descriptions of what the men endured are compelling and moving. Barnes particularly shines in the conclusion, when he describes the finalists with enthusiasm and admiration. S.G.B. © AudioFile 2015, Portland, Maine [Published: OCTOBER 2015]