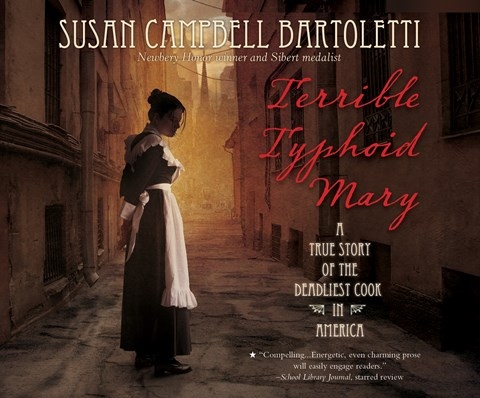 Donna Postel narrates in a quiet, carefully enunciated style. Her steady pace is perfect for the drama that unfolds around the infamous “Typhoid Mary,” the Irish immigrant who, in her role as a cook, passed typhoid fever to approximately 50 unsuspecting people. Postel uses an even voice as the facts of Mary’s involvement in cases of typhoid fever become clear and the book raises questions about the roles of the health department in protecting public health, the judicial system in handling such cases, and journalists in covering such stories as they arise. Given that author Bartoletti is careful to set Mary in her time period while sharing her human foibles, it’s no wonder that Postel’s voice softens and lingers on the events of Mary’s final years, including the care that friends provided her and the care with which she wrote her will. A.R. © AudioFile 2015, Portland, Maine [Published: OCTOBER 2015]