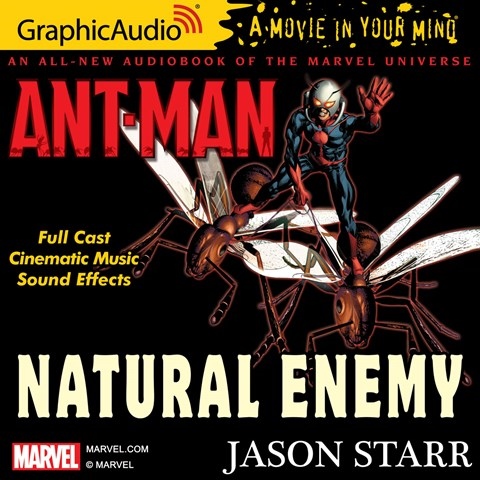 by Jason Starr | Read by a Full Cast

It's not necessary to be an Ant-Man fan or even a comic book aficionado to enjoy Jason Starr's audiobook about Marvel's tiniest superhero. A full cast from GraphicAudio brings the adventures of Scott Lang; his daughter, Cassie; and various friends and enemies to life. The cast of more than two dozen actors tells the story of the fledgling superhero, who steals a suit with shrinking powers from its inventor, Hank Pym. Pym eventually gives Lang his blessing, and the hero tradition continued. The actress playing Lang's troublesome daughter sounds a bit old for the part, but that's is easily overlooked because of her skilled portrayal. The sound effects sound so real you'll look around for police cars or check your cell phone for phantom rings. M.S. © AudioFile 2015, Portland, Maine [Published: SEPTEMBER 2015]