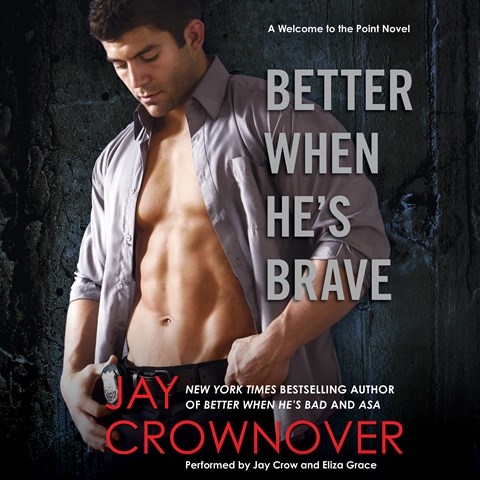 BETTER WHEN HE'S BRAVE Welcome to the Point, Book 3

Narrators Jay Crow and Eliza Grace portray Titus King and Reeve Black, a couple enmeshed in the chaos of The Point. When Reeve provides federal evidence on corrupt marshal Connor O'Rourke, Titus becomes her bodyguard and despises himself for wanting her. Reeve's secret plan for revenge may be their undoing--or their salvation. Crow's and Grace's narrations are a mixed bag. Crow perfectly captures the tone of a world-weary cop in a desperate situation. His timbre is thick and his reading brisk, so syllables are often swallowed. Furthermore, his female voices are caricatures. Grace's quiet voice is silvery and smooth. But her mechanical phrasing is stiff, and she doesn't nail Reeve's tough-edged bravado. C.A. © AudioFile 2015, Portland, Maine [Published: OCTOBER 2015]