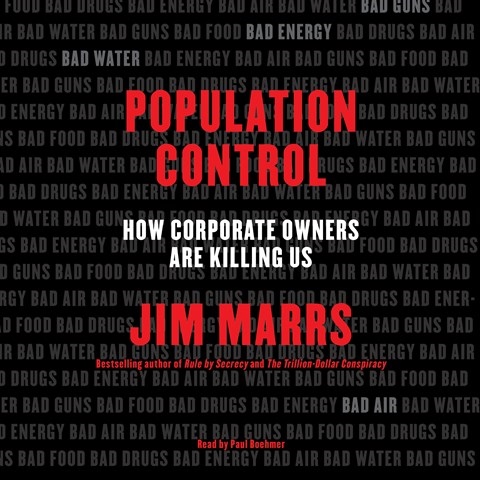 POPULATION CONTROL How Corporate Owners Are Killing Us

This audiobook encourage listeners to let loose their paranoia. Marrs, a conspiracy theorist, covers hundreds of sources of fear--from GMO foods, vaccines, and the arms trade to the government's alleged "main core" enemies list. He weaves truly troubling facts into an implausible tapestry of "globalist" conspiracy. Narrator Paul Boehmer's delivery reminds one of the cynical tone of a political attack ad. While a style that can be effective for 30 seconds doesn't work for a 13-hour audiobook, Boehmer is otherwise a good performer. His pace is even, his voice is strong, and only a few words give him trouble. Marrs is an equal opportunity conspiracist, blaming both big government and corporations for our problems. Dig a bomb shelter. F.C. © AudioFile 2015, Portland, Maine [Published: SEPTEMBER 2015]