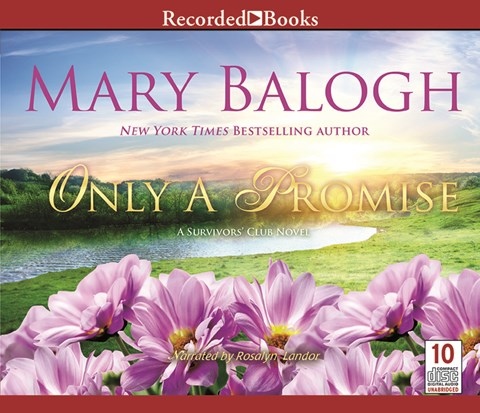 ONLY A PROMISE The Survivors' Club, Book 5

Narrator Rosalyn Landor's deftly paced dialogue and talent for characterization enhance this romance between a guilt-ridden veteran of the Napoleonic Wars and an innocent victim of scandal. Having married for purely pragmatic reasons, Ralph and Chloe gradually learn to trust and depend on each other while mildly resisting the budding emotional relationship both had sworn to avoid. Landor's pleasantly deep voice provides convincing portrayals of Ralph and the other male characters, while also conveying Chloe's sweetness and firmness. Landor's matter-of-fact delivery of the story's exposition dignifies but doesn't enliven Balogh's somewhat repetitive prose. Supporting characters, including the Dowager Duchess, Lord Trentham, and a certain recently promoted footman, are uniquely voiced, immediately identifiable, and a pleasure to hear. T.M.D. © AudioFile 2015, Portland, Maine [Published: NOVEMBER 2015]