Home»Reviews»OUT OF AFRICA & SHADOWS ON THE GRASS 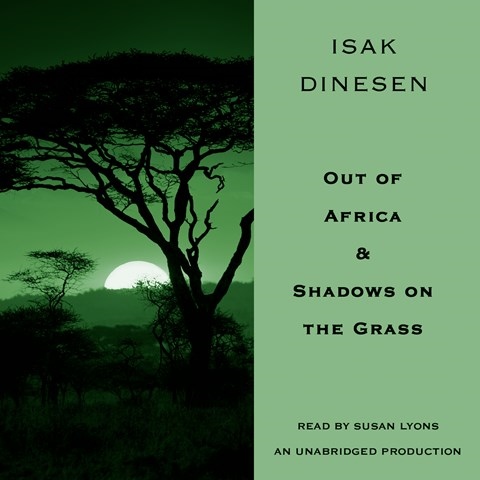 OUT OF AFRICA & SHADOWS ON THE GRASS

To hear Susan Lyons narrate these classics is to be transported back to their time and place—British East Africa (now Kenya) in the early twentieth century. In tones rich, rolling, earthly, and regal, she personifies equally well the Baroness Blixen and the land itself. The author’s love and concern for the land and its people shine through this simple yet stately presentation. Steeped as these stories are in time and place, they also cannot avoid reflecting that other artifact of their time: a certain white NOBLESSE OBLIGE that skims below, and occasionally breaks the surface of, the story. But even in this, Lyons’s performance remains true to the text. While a picture in time taken from a particular vantage point, this audio and Lyons’s performance are a memorable and faithful portrait. K.W. Winner of AudioFile Earphones Award © AudioFile 2015, Portland, Maine [Published: DECEMBER 2015]