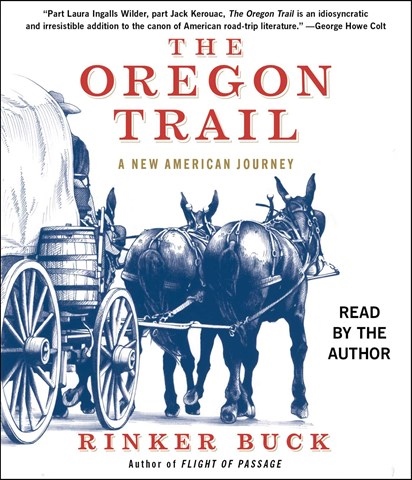 Rinker Buck sucks the listener into his "see America slowly" trip over the Oregon Trail in a mule-drawn covered wagon with his brother, Nick. It's a crazy, arduous, and sometimes dangerous adventure completely out of its time. The hilarious and heartwarming relationship between Rinker--neat freak, control freak, planner--and Nick--a slob with a dirty dog, a penchant for swearing, and the ability to fix absolutely anything--is clearly apparent in Buck's voice. He shares a fair bit of history about mules, Schuttler wagons, cholera, Mormons, and female pioneers. Occasionally, Buck can be a bit stiff in the historical narration, but this weakness is more than made up for by his humorous self-deprecation as he chases runaway mules across the Wyoming plains in Walmart slippers dodging antelope skeletons and gets ripped off by an Amish tack merchant. A.B. © AudioFile 2015, Portland, Maine [Published: AUGUST 2015]