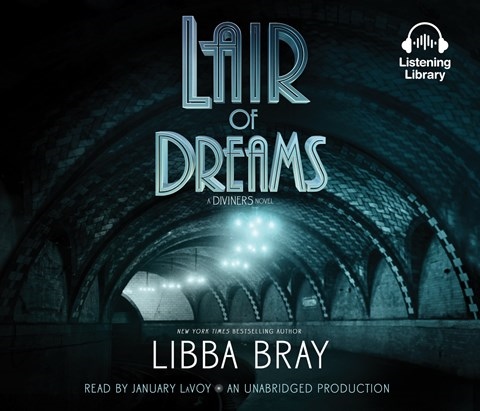 LAIR OF DREAMS A Diviners Novel

In this long-awaited sequel to THE DIVINERS (2012), Diviners and Dreamwalkers abound in 1920s New York City, and narrator January LaVoy’s performance is simply amazing. Now that she’s “outed” herself as a Diviner, Evie O’Neill is the Sweetheart Seer, a radio star. But all is not “jake.” Evie is at odds with Uncle Will, the occult museum is in the red, and she’s forced into a “faux” relationship with smart-alecky Sam Lloyd. Meanwhile, a sleeping sickness is plaguing the city and Dreamwalkers Henry and Ling Chan try to find the cause. In a plot crowded with so many characters, LaVoy doesn’t utter a false note. Her vocal range is awe inspiring, her characters are fully developed, and her voice is lovely. The divine duo of Libba Bray and January LaVoy does not disappoint. S.J.H. Winner of AudioFile Earphones Award, 2016 Audies Winner © AudioFile 2015, Portland, Maine [Published: AUGUST 2015]