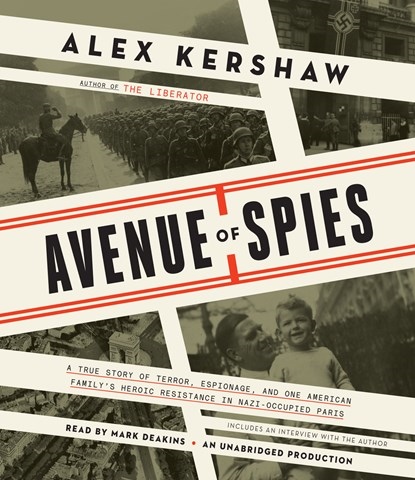 AVENUE OF SPIES A True Story of Terror, Espionage, and One American Family's Heroic Resistance in Nazi-Occupied Paris

In steady tones, Mark Deakins narrates this chilling history of espionage in German-occupied France during WWII. The story features two people, a 30-year-old SS-Standartenführer named Helmut Knochen and an American named Sumner Jackson. Both live on Avenue Foch, where the Gestapo tortures resisters and spies work to obtain and pass along information. Jackson, a WWI veteran who is now a doctor, helps wounded British and Americans escape the Nazis. Mark Deakins’s subtle French accents and flawlessly enunciated German terms are intertwined in a relentless performance. As Jackson, his wife, and their son secretly work with the French Resistance at great risk to themselves, Deakins’s narration keeps listeners glued to the battle of wits and nerve in Vichy France. M.B.K. © AudioFile 2015, Portland, Maine [Published: DECEMBER 2015]