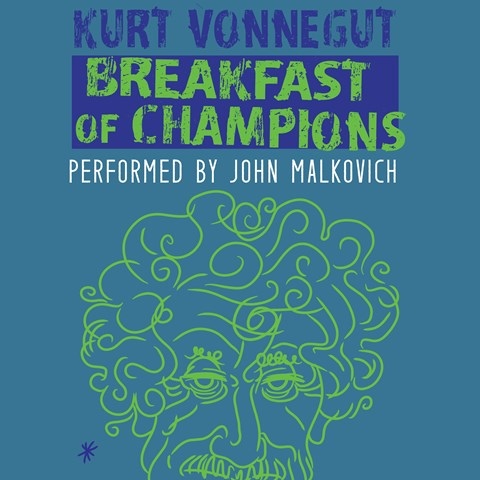 Pairing Vonnegut and Malkovich seems like a great idea—though this audiobook doesn’t fulfill the promise of the combination. Malkovich’s narration is agreeable, but his performance isn’t distinguishable in any way, and there are a handful of background noises throughout the production. The story traces the events that lead Vonnegut’s famous character, Kilgore Trout, to meet Dwayne Hoover, an incident that sends Hoover on a violent rampage as he comes to believe that everyone is a robot. The print version of the book is filled with scores of images, and this is where the book fails as an audiobook. Malkovich explains each image in a few words by saying “Here, there is an image of . . .” His tone hints at impatience or boredom with the process, and the listener too grows tired of it as well. L.E. 2016 Audies Finalist © AudioFile 2015, Portland, Maine [Published: SEPTEMBER 2015]