Home»Reviews»IRON RAILS, IRON MEN, AND THE RACE TO LINK THE NATION 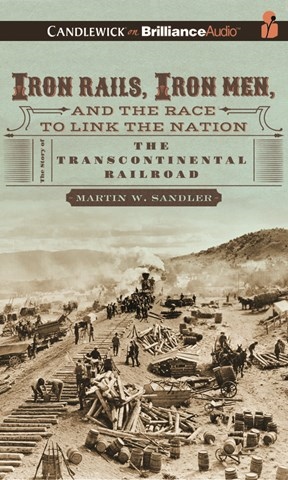 IRON RAILS, IRON MEN, AND THE RACE TO LINK THE NATION The Story of the Transcontinental Railroad

Narrator Grover Gardner is an unobtrusive narrator. That's not to say he sounds disinterested. Quite the opposite. He's clearly fascinated by the drama of the race between the Union Pacific and the Central Pacific railroads to connect the nation. But his understated style lets the story itself carry listeners along. With steady pacing, Gardner mirrors the relentless rate of the six-year undertaking. He uses pauses and emphasis to call attention to important people--from Leland Stanford to the single woman on the entire project--as well as to specifics such as the discrimination against Chinese workers, the confrontations with Native Americans, and the solutions to thorny technical problems such as how to drill rock away on a narrow ledge. An epilogue details the subsequent lives of the key players of the transcontinental railroad. A.R. © AudioFile 2015, Portland, Maine [Published: OCTOBER 2015]